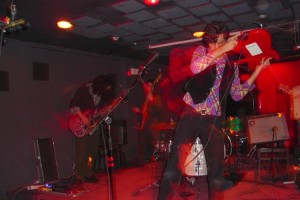 Celebrating the demise of something seems counterintuitive and anti-climatic, but Plastic Crimewave Sound isn’t just some buncha Chicago jerks; it’s these Chicago jerks, fronted by the ever-mustachioed Plastic Crimewave. Sure, the ridiculous heights of recording with Ya Ho Wah 13’s Djin Aquarian likely aren’t forthcoming, but there are scant dudes who can say they’ve even had the opportunity to perform with that sub-terra legend. Whatever counted as the troupe’s regular lineup apparently disintegrated sometime last spring, the travails of everyday life being cited as the main reason. You know, babies and marriage? All this PCS hoopla, though, surrounds the group’s (probable) final recording, a tape-only affair being issued through an imprint helmed by Running’s bassist. There’s gotta be a veritable hog-load of unissued work, so it should be assumed that these seven selections were chosen for inclusion on “The Oblivion Programme” for a reason. Haughty Brit spelling aside, this clutch of work pretty easily ranks as the ensemble’s most dour. But you know who crops up? Michael Yonkers. His appearance on “The Cruel Beyond,” while more than noisily proficient, doesn’t quite approach the sputum spewing on “Blistering Black.” It’s not quite PCS in a Norwegian-themed dirge, but as close as it could possibly get. The gloom’s almost as liberally dashed over “Grapes from the Air,” which includes Verma’s Whitney Johnson playing viola (she’s also slated to perform an opening set at the show). All this putrid strumming’s not really coming to an end, though. Plastic Crimewave’s endeavoring to keep up with his other projects—his Syndicate, which has a new disc in the works, Moonrises and Vision Celestial Guitarkestra. Folding this one troupe then could just open the spaceways to more inspired improvisation. If not, there’s always Galactic Zoo Dossier and the sporadic show Plastic Crimewave books across Chicago. That should suffice … for now. (Dave Cantor)