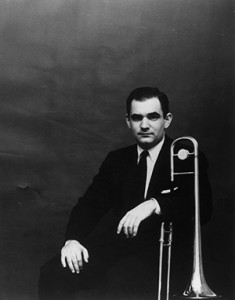 A Chicago native, Russo’s influence and legacy must be measured in decades and across genres and disciplines. Having studied with pianist Lennie Tristano as a boy, Russo was composing music of his own as a teenager and soon leading jazz bands.

Although Russo joined Stan Kenton’s forty-piece Innovations Orchestra as a trombonist in the early 1950s, he ushered in a pioneering style of orchestral jazz as arranger and composer for that ensemble that remains unparalleled.

Iconic Russo works such as “23 Degrees North, 82 Degrees West” and “Frank Speaking”—both of which will be performed as part of a December 7 concert of Russo’s works at the Jazz Showcase—spotlight Russo’s fascination with cross-fertilizing multiple forms.

“People may not realize how much of a surprising and interesting influence Bill has been on American music,” assesses bluesman Corky Siegel, himself one who loves to bridge musical worlds, and who considers Russo his mentor in doing so.

It was actually conductor and former Ravinia Festival music director Seiji Ozawa who used to come and see the Siegel-Schwall Band in area clubs in the late 1960s, and “stay all night,” as Siegel recalls. “One night he asked me, ‘Would your band, Siegel-Schwall, like to jam with my band, the Chicago Symphony?’ Of course, I immediately thought of Bill to compose the music, and that is what led to ‘Three Pieces for Blues Band and Orchestra.’ It was recorded for Deutsche Grammophon and went platinum.

“I can’t tell you how many people have come up to me and talked about the influence that record had on them: it wasn’t simply a blues band playing with a symphony but a juxtaposition and a potpourri of possibilities of how blues and classical could come together: not a blend or ‘crossover,’ but side by side. Thousands who heard that record had never heard blues of any kind.”

Trumpeter Orbert Davis will perform a piece that Russo wrote for him, “Horn Player,” and also considers Russo his mentor. “He hired me to teach at Columbia when I graduated from DePaul,” Davis recalls. “I taught at Columbia for fourteen years. It was inclusive, diverse, multi-genred. The college today is a reflection of what he believed and what he started.”

“He was the epitome of the Third Stream, as Gunther Schuller called it, the bridging of jazz and classical, which is my life now,” says Davis, whose Chicago Jazz Philharmonic is his own attempt to forge a similar new path. “He was a classical composer in that tradition of orchestration, inspiration, et al., but at his heart he was a jazz musician. He was most influenced by Duke Ellington. How he could balance those two worlds made a huge impression on me.

“He brought classical techniques to rehearsals, a classical aesthetic in terms of artistry and presentation, that the way the band looked was as important as how it sounded. Soloists need to stand up because the audience listens with their eyes. He hired a valet to rub the musicians and make sure they were lint free, that there was a hankie in our pocket, that our shoes were shined. He made sure we were quiet on the stage, not hanging out. Professional demeanor. And no one could argue his skills as an arranger, it permeated who he was. As a composer, he still influences the way I approach my writing.

“When Bill wrote a piece for you it was like going to a tailor. We would talk about things, you would play for him, that was so eye-opening. He also taught me to never throw anything away as a composer. Many times a full piece based on a scrap or an idea from two or three years ago finds its way into a larger piece.”

Albert Williams, who was also hired by Russo to teach at Columbia, worked with Russo in the early days of his work in off-Loop free theater. Williams is the principal organizer of Columbia’s Russo event and considers Russo his mentor as well.

“Bill had turned away from jazz and had explored rock ‘n’ roll and tried to write non-genre theatrical music,” says Williams. “There was a cutting-edge counterculture emerging in the mid-sixties. Bill had been in England and was invited to come home to Chicago for the first full-time position at Columbia and he did so because he wanted to explore that more innovative Third Stream. He founded the Chicago Jazz Ensemble, he had been writing operas in England and even founded an opera company in Chicago as a vehicle for his own music. And he founded the Center for New Music at Columbia. He realized that both Ellington and Kenton had been limited by commercial expectations and that composing under the auspices of a school would not have that limitation. 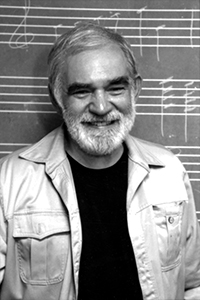 “This was a composer who majored in English, he was very literary. And very eclectic. He always wanted to write music that reflected the larger culture. He loved Paris in the 1920s: Cocteau, Satie, Stravinsky, Picasso, the Ballet Russes, Harlem dancer Josephine Baker dancing the Charleston for Gertrude Stein; Virgil Thomson. Bill loved Ellington when he got more serious and wrote larger pieces rather than the popular singles. He was a trombonist, but through orchestration he bonded with ‘the band’ as his instrument. He was after structured improvisation, the desire for more structure than players wanted during the bebop era. He was a big Gershwin fan but he loved Mozart, who was his favorite composer, especially the operas. Bill wrote in a Mozart vein when he wrote operas in that he used set pieces that were through-composed, recitative, aria. Later he would tinker with the blues and would set poetry as blues art songs as Schubert had done with the poetry of his day.”

Williams and Russo hit it off “because I had a singer’s articulation. He was forty-two, I was twenty, but he liked that I could project lyrics. I studied with Bill, and assisted him as a director and excitedly accompanied him as his cross-fertilization of genes, story theater set to music. This could only have happened in Chicago as New York things were far too compartmentalized and in San Francisco, the scene was too small. Here, things were more manageable. It was really rock opera in story theater style and was perfect for the didactic Paul Sills.”

Although Russo brought film scoring to Columbia and some of his students became film scorers—most notably John Barry, whose James Bond “Thunderball” is replete with Russoisms—Russo himself only scored a single film, an animated feature called “Everybody Rides the Carousel,” which featured Dizzy Gillespie as guest soloist and Meryl Streep as its voice actress. The film will have a free screening as part of the Russo celebration.