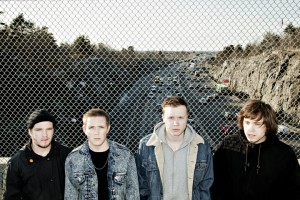 The maturation of rock ’n’ roll hasn’t happened in any noticeable form over the last thirty-five years. Even back then, it was really just a regression to primeval tendencies that’d been glossed over amid blowin’ rails with some West Coast A&R man.

Sweden’s Holograms haven’t revolutionized the genre, but the quartet’s been at work trying to inject punk and its satellite musics with even a twinge of immediacy. They’ve succeeded sporadically on “Forever,” a follow-up to last year’s self-titled debut.

“It’s a lot of philosophical questions about life,” Andreas Lagerström, the ensemble’s frontman, says of his new work’s lyrical penchant. Most listeners would be able to guess that after pushing through the most pensive track “Rush” and its manic proclamations of how difficult it is to spark fire at the ocean’s bottom.

All the conceptual sparring might have sprung from the band’s first U.S. tour, on which some of those new lyrics first saw daylight. Holograms didn’t have the easiest time getting here.

“[There were guards] with automatic weapons inside and it was really strict,” Lagerström says of last year’s visit to the U.S. embassy in London, a first attempt to gain access to the United States for touring. “But the weird thing is that there’s so much bureaucracy … And when you get there, you just stand in a line, go to the little window, and they’re like, ‘Play in a band? Where are you going?’ And then they’re like, ‘OK, you can go.’”

Getting here hasn’t been as much of a hassle this time around, but that might have to do with the mounting experience stowed from Holograms’ earlier worldwide trek.

Last year’s tour in support of that self-titled debut was framed with some pent-up aggression, exemplified on live-wire numbers like “ABC City.” Something of an aural anomaly, all its punk intentions are now subsumed by more dour goth overtures. Some of those faster, punkish pacings are still present (“A Blaze on the Hillside,” for instance, and “Meditations,” which finds the Swedes approximating the Adicts.) “Forever,” more than anything else though, sounds like the result of a band parsing its first effort and deciding to focus.

“We don’t really try to change … We had a very specific idea of how we wanted it to sound,” Lagerström says. “But it was more like we felt it was a continuation of the first one … This time we had a pretty clear idea of what kind of feeling we wanted for the record.”

Lagerström didn’t have a hand in the album’s production, but said he has a background behind the boards stretching to his teen years when he experimented with cheap equipment. But the days of inexpensive wares could be behind Holograms, as tours through Europe and now the United States have redoubled support from the Captured Tracks crew. Sticking with the Brooklyn label for its second album isn’t a stunner, and feeds into Lagerström’s sense of the world—loyalty and not being full of shit are two significant tenets.

He rails against The Clash, claiming that some of the band members’ middle-class upbringing disallowed them from being truly connected with the downtrodden. Maybe he’s right. Joe Strummer, even as he sported that RAF patch, an insignia pointing to an allegiance with German militants the Baader-Meinhof Group, signed to a corporate label and only broached lyrical idealism.

Burzum, by contrast, is given a pass. That dude did time for a killing.

“I don’t think [music] has any part of actual political movements,” Lagerström says. “It’s like a hippie thing.”

Unsurprisingly, he isn’t into jam bands.

“When people come to see our show or people listen to our music, I don’t care what they do—how they live their lives,” he says. “If they want to listen to us, fine. If they don’t, fine. I don’t wanna tell people what to do. I don’t think people should think musicians should tell [them] what to do … especially not political things.” 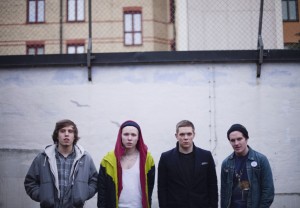 A fair assessment and one with tendrils reaching pretty much any genre. No one’s gonna listen to Justin Timberlake make political pronouncements. But the political and philosophical worlds often intersect, making Lagerström’s compendium of ideas a fragile thing. He’s gotten a bit more about right- and left-wing ideology being a part of the music world. But then one’s economic station in life goes and gets in the way of discourse. And logic.

“It’s just like a romantic idea about what the working class is,” Lagerström says of fawning over the “Salt of the Earth.” “It diminishes it. It doesn’t make the people who actually work in the mine or whatever—it makes them inhuman, like they’re some kind of romantic figure, when it’s just ordinary people.”

But it is heroic to be a normal guy, go to work and get over. We can’t all be rich folks or twenty-somethings in rock bands that crib Ian Curtis’ most morose moments and rage against fans for giving a fuck. With all punk’s catholic posturing, Lagerström resurfaces from pedantic little-kidisms.

“I really like Bruce Springsteen, so it kinda fucks my argument up. It’s super-full of shit.”