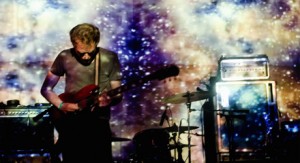 Kranky is the most high-profile, under the radar record label that calls Chicago home. For the past twenty years, founder Joel Leoschke has fostered a stable of uncompromising, unpretentious artists whose work may have gone unreleased were it not for his uncanny knack for curation. The thread drawing together outfits as disparate as Deerhunter and Stars of the Lid has united musicians worldwide under one umbrella: part ambient, part electronic, part black earth rock ‘n’ roll. And “Black Earth” might be the best description available for the abstract sound Leoschke is after. As the title of local quartet Implodes’ full-length debut suggests, there’s an engrossing mysticism at work in much of the Kranky repertoire. The solo recordings of Implodes’ guitarist Ken Camden echoes this boundless energy, but even he is quick to acknowledge the fleeting nature of his alchemy, and his hesitancy to share it.

“I’ve always been making recordings at home and stuff, but I’m kinda bashful and wasn’t about to slip [Leoschke] a tape or anything.”

Cajoling artists of this ilk is an elusive art form, something Leoschke has perfected. Somehow he’s managed to cater to the cagey, artists wise enough to avoid making a deal when they needn’t, musicians hungry for harmony on a cosmic scale rather than the fleeting fame offered by superficial scenesters. Art of this kind often has a unique origin story.

“A lot of the [Kranky] projects, a lot of the artists, they’ll have at least a couple of albums where they’ve done a lot of the recording themselves. That’s not across the board, but there’s definitely—I know of a good number of them—[artists who] do it from home.”

The unmistakable intimacy of Kranky’s output is undoubtedly the label’s hallmark. Leoschke has latched onto the album as artifact, yet instead of operating as a boutique business, mining private press releases from decades past to sell old recordings anew for exorbitant sums of money, he has established a fruitful exchange in the present with inventive contemporary musicians whose modesty and independence may have marginalized their impact were they left up to their own devices. With Kranky’s backing, these groups are granted the worldwide distribution and gravitas that their thoughtful, highly personal expression warrants.

“Unlike a lot of labels, he doesn’t expect people to tour,” Camden says. “That’s a very big thing. He doesn’t let that hinder who he is going to release. I feel like he’ll release people just because he really likes the recording and thinks it’s going to make a really great album, and it could just be people who sit at home and make recordings and never see the light of day. To me that’s a very big difference from a lot of labels who really expect you to tour a lot.”

The impact of this practice is incalculable. Kranky artists have a loyalty to the label that is unsurpassed. Camden, for instance, refused to let the twentieth anniversary pass without a proper celebration. And so from December 12 through December 15, thirteen artists will take over three venues for four nights of performances ranging from the heavy (Disappears at the Empty Bottle) to the blissful (Grouper at Constellation) to the ethereal (Tim Hecker at Constellation) to the majestic (Stars of the Lid at Lincoln Hall). It’s important to bear in mind that Camden is an artist who was at one point reluctant to widely release any music at all. Now, alongside Kranky’s publicist Brian Foote, he’s the primary force behind the booking of the twentieth-anniversary celebration.

The celebration has a unique weight for Camden. Come spring, he’ll have relocated to Los Angeles to pursue soundtrack work. Even a cursory listen to this year’s “Space Mirror” release offers little doubt that he will succeed. Oscillating somewhere between the timeless tones so expertly honed by Robert Fripp and Brian Eno on “(No Pussyfooting)” and Camden’s familial connection with space exploration, the results are as warmly sentimental as they are richly futuristic.

“I was thinking about my dad a lot because he worked for NASA. I feel like all of the space things that I’ve been interested in my whole life have come from him. They were always around when I was a kid.”

Like many Kranky releases, “Space Mirror” is marked by a simple grandeur. The slow-building sounds coalesce toward some heavenly end, seducing the listener into an infinite slack-jaw, eyes glazed, mind transubstantiated. That ambient music evokes these sentiments became a trope because of artists like Camden’s success at eliciting these responses. Viewed in a live context, the results are only intensified.

The chance to experience that fortune is fleeting. As musicians, the group is in high demand. Implodes’ other guitarist Matt Jencik continues to stand in on bass for Slint’s reunion tours. Bassist Emily Elhaj will be touring with Angel Olsen’s band next year. Drummer Justin Rathell has been moonlighting in El Mejor. But Camden remains optimistic: “Implodes is gonna stick it out. It’s a pretty slow burn to me.”

With Kranky’s kindling to ignite the band, two decades of uncompromised craft lends a quiet confidence to his sentiments that is too significant to neglect.