“In that nighttime world, 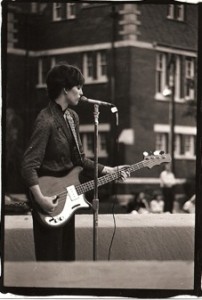 I conquered each day,
but the light would always come,
and take us away.”

Lorna Donley was an artist whose spirit cannot be distilled into words on a page. No eulogy will be sufficient enough to capture her essence. Hers was a rare flame, one bound to alight again in some lesser form at our culture’s periphery, while her work here in Chicago will burn forever, a bright beacon for the perpetual next generation.

Donley’s creative output as the bassist and singer of post-punk progenitors DA! proves what she knew all along: “Time Will Be Kind.” To her legacy, it has been. DA! didn’t sound like any other band in Chicago when they formed in 1978. They didn’t sound like any other band at all. Their contemporaries (The Effigies, Naked Raygun, Strike Under) may have gone on to achieve greater notoriety, but the “Dark Rooms/White Castles” seven-inch single, and the “Time Will Be Kind” twelve-inch EP that comprised their discography—up until a recently released rarities “Exclamation Point” LP—offer a remarkable glimpse into Donley’s pioneering sense of expression.

DA! existed at a time when participating in the punk lifestyle elicited open hostility from the general public. They were the only band in the local scene that counted women among their members. Even the punks themselves were often confounded by the group. In retrospect, it’s easy to see why—their music was singular. Not quite punk, not quite rock, not goth, not psych. Donley counted Gang of Four, the Cure, Bauhaus and Siouxsie and the Banshees as some of her primary influences, but DA! belongs on its own tier. The early recordings of those four bands share an unmistakable urgency, and a notable homeland in Great Britain. Punk music began as a transatlantic genre, and in reclaiming that ecstatic style on American soil, DA! aligned itself with innovative bands of the highest order, sharing bills with Hüsker Dü, Mission of Burma and X.

In an era when conformity was the rule, when a perverse patriotism pervaded culture, when social forms of rebellion were integrated into the mainstream, Donley’s work with DA! was avant-garde by comparison. That the band was not able to sustain themselves beyond 1982 is proof of the difficulty of their efforts. DA! represented authenticity at the height of fabrication. To hear their recordings now, all still confined to the very slabs of wax they were etched into three decades ago, still sounding as outsider as ever, sets them apart from their time here in Chicago, from their shows at the Exit, O’Banion’s and Oz, from any particular moment or location, rooting them in time immemorial, like all good art is.

Lorna Donley had an appreciation for that insight. After DA! disbanded, Donley had stints in a trio of groups (A Mason in Ur, The Veil, Hip Deep Trilogy) and then studied art history and French at the University of Illinois at Chicago. After earning a BA degree in 2001, she studied at Reid Hall-Columbia University in Paris, and by 2004 she had earned a Master’s degree in Library Science and Archival Administration from Dominican University. Donley spent the last decade employed at the Chicago Public Library’s Harold Washington Library Center, where she started as an Archival Specialist in the Special Collections section, and then continued on as a Librarian in the General Information Services department. This past September she married Scott Taves, who is also a librarian at Harold Washington Library.

Lorna Donley, age fifty-three, passed on December 1 at Swedish Covenant Hospital due to a ruptured aorta. She is survived by her husband; by a sister, Kate Donley, of Burlington, Vermont; a brother August Donley and her father, Thomas Donley, both of Chicago.

She is survived by the city itself, a poorer place without her in it. (Kenneth Preski)