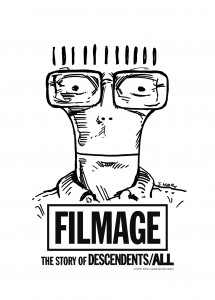 As much as anything else, this is the story of Bill Stevenson. He’s a drummer. And from all the praise dropped at his feet during this newly released ninety-minute film, it would seem that he’s a pretty good one. If Descendents isn’t a familiar name—and it should be—maybe Black Flag summons some sort of recognition. If not, “Filmage” has all the talking heads one’d need to get informed. Keith Morris crops up. Mike Watt, too. And it would seem that Dave Grohl is becoming the new millennium’s Ian MacKaye, replacing that D.C. stalwart in punk documentaries. Watching those famous faces flit across the screen narrating the development of Descendents doesn’t get tiresome, though. The issue with films like this is that frequently the story winds up being more gripping than the music. No pop punk resurrection is set for the immediate future, yet early cuts from Descendents—with Milo Aukerman on vocals—isn’t surpassed by too much else in the music world. After “Filmage” explains the singer’s departure, ALL resulting from his split and eventual return to the fold (for shits and giggles, while he’s not doin’ science-y things) it all descends into the Stevenson saga. And things get pretty heavy. Maybe viewers don’t need to know about the drummer’s relationship with his father. The simple ghoulishness of his medical issues are kinda engaging—and of course, who won’t smile when Stevenson says stuff like, “he made being sick really kick ass, you know?” But it’s all really just another nostalgia trip—this one’s pretty well crafted, though. “A Band Called Death” tried to get over on the familial thing while following around some guys from Detroit; “Filmage” replaces blood lineage with a connection forged in vans crossing the nation. It works for the most part with Stevenson’s post-op performances tuggin’ at the ole’ heart strings. (Dave Cantor)