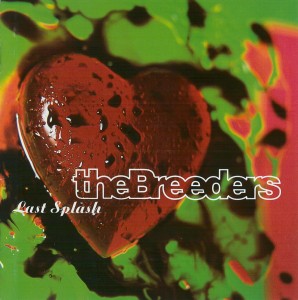 Dayton, Ohio, isn’t a big place, but it’s given the rock-set both Guided By Voices and the Deal sisters, who’ve had a guiding hand in the Pixies and the Breeders. That latter group is celebrating the twentieth anniversary of its “Last Splash,” an album that unloosed one of the most recognizable bass riffs of the last two decades. Even if “Cannonball” weren’t included on the disc, there’d be more than enough reason to revisit the 1993 work without 4AD reissuing the set as either a three-CD compendium or a seven-LP suitcase. The Breeders’ second full-length hasn’t been fetishized the way its contemporaries have—anyone who still cares about Soundgarden needs to have a heavy dose of antipsychotics prescribed to them. But there aren’t really any clunkers (“Drivin’ on 9” comes close, but were it the musical statement of a new band, there’d be a spate of faux-country popularity in the wings), just a few songs that could have gestated a bit longer. “Divine Hammer” might even explain the impetus for San Francisco’s Grass Widow, as well as grant insight into the range of approaches the Breeders were capable of. It’s not quite pop, but for a band that toured with Nirvana and has links to some noisy acts, the song gets awfully close. What’s kept the album from being Bush’s “Sixteen Stone,” though, are those pop songs sitting next to shambolic experiments. Explaining what “Flipside” sounds like is virtually impossible. It’s whatever grunge was codified as, but includes underground rock stuff from the preceding fifteen years. Maybe Operation Ivy’s “Bankshot” is its closest sonic relative. “Roi” is a perfect dirge—again something a band could compose today and enable a deal with some respected indie. “SOS” is just a glory of an instrumental. But honestly, counting a Pixie and a woman who has ties to Spaceman 3 in its ranks, how could the Breeders not come up with this stuff? (Dave Cantor)