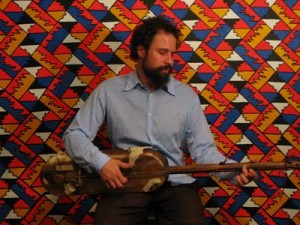 Trading in Joshua Abrams’ “Represencing” release is a lucrative practice. Somehow the 550-copy, vinyl-only album hasn’t become widespread in digital form during the past year, raising the resale price of the artifact while maintaining the mystique of its allure to those with the pleasure of owning it. The worldwide acclaim is justified—it’s an instant classic—Chicagoan by way of Southern Morocco, where The Gnaoua World Music Festival is held. There, the guimbri, a three-stringed bass made out of animal hide, is mystically employed by the Gnawa in a dialogue with Westernized guest jazz, pop and rock musicians, an event of immense local import. Attendance averages half a million people over four days, and many of the performances are free of charge. When Abrams, an adept bass player, approached the instrument, the sounds of Ornette Coleman’s “Dancing in Your Head” must have arisen in his consciousness. Though Coleman linked up with Northern Moroccans, the framework for Abrams’ hypnotic compositions was already in place; conventional jazz methods discarded in favor of insatiable passions, melodic freedom and a rhythm with low-end deep enough to test the full frequency range. It seems odd that Natural Information Society, the title supplied by Abrams for this project, is slated to open the show, presented by the Red Bull Music Academy. The jury’s still out in some circles on the programming that Red Bull sponsors, and how they go about sponsoring it. (“The Academy” itself is invite-only to budding musicians, yet the guest lecturers are prestigious, even adventurous in the inclusion of Stephen O’Malley.) The rest of the evening is electronic fare, which is just as well. There’s never a bad time to see the Natural Information Society when Abrams continues to prove with each release that he’s always sitting on a masterpiece. (Kenneth Preski)