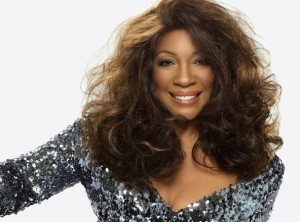 Nearly fifty years after she became an international sensation as an original member of the Supremes, Mary Wilson still knows how to light up a room. As she hosted a cocktail party to talk about her upcoming holiday show, all heads were turning when she made a star’s entrance, complete with accessorized golden gown.

Wilson mingled and posed for photos before sitting down to talk about her long career. “It didn’t come easy,” says Wilson. “We had seven flops before catching on. The Marvelettes had five consecutive number-one hits and so [Motown president] Berry Gordy decided to put us with the same songwriting team.”

Originally formed as the Primettes in 1958 as a female version of the popular Detroit male-singing group the Primes, it was Wilson who recruited her classmate Diane Ross—who would be later called Diana at Gordy’s direction—to join what was originally a quartet, becoming a trio in 1961.

“Black females did not have major star aspirations in those days,” Wilson recalls. “This was before the Civil Rights Bill, but we dared to dream. We knew if we didn’t get a hit record, we’d have to go to college, and Berry kept telling us, ‘Just sing, not to be stars.’ We were so young we couldn’t understand why everyone didn’t understand how great we were. So we just kept at it.”

Finally, after years of recording backups for others and being on the Motown back burner, “Where Did Our Love Go” became a number one hit in 1964 and catapulted the Supremes to super-stardom. A string of number-one hits followed including “Baby Love,” “Come See About Me,” “Stop! In the Name of Love,” “Back in My Arms Again” as well as “I Hear a Symphony,” “You Can’t Hurry Love” and “Someday We’ll Be Together,” among others.

“These were years of conflict,” says Wilson, “the time of Martin Luther King and the Civil Rights struggle. So that our music was in kitchens, in bedrooms, everywhere, was a big deal. I remember a Jewish lady coming up to me and saying, ‘I allow my kids to watch you.’ There had not been photos on album covers before then and suddenly, the world opened up and received us. I remember one place we heard on the radio that ‘Three Negresses have landed,’ like it was an invasion or something and we were like, ‘Where? Where?’”

Yes, Wilson will sing the hits associated with the Supremes at “Mary Wilson’s Holiday Spectacular” as well as seasonal music, including Christmas music of the Supremes. But there will also be some surprises, such as Wilson demonstrated by spontaneously singing an unamplified, a cappella and poignant rendering of “Here’s to Life.”

Special guests for the show will be the Four Tops, who will perform their classic Motown hits such as “Baby I Need Your Loving,” “I Can’t Help Myself (Sugar Pie, Honey Bunch),” “It’s the Same Old Song,” “Reach Out (I’ll Be There),” “Bernadette,” “Walk Away Renee,” “Standing in the Shadows of Love,” “Shake Me, Wake Me,” “Still Waters Run Deep,” “In the Still of the Night” and “Ain’t No Women Like the One I Got” as well as perform with Wilson. 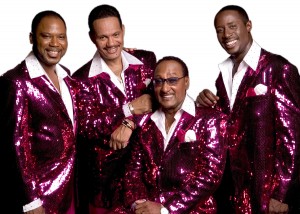 Last surviving original Four Tops member Abdul “Duke” Fakir was also on hand reminiscing about Motown. “It was a magical time,” he says. “We began singing together by accident. We loved to sing, with each other, in front of others, wherever. At a party, we started singing together as if we had rehearsed and that was sixty years ago now. We were the Four Aims but we became the Four Tops after the Ames Brothers became popular.

“We did all genres of music and even backed up Billy Eckstine. We were always on the fence and middle of the road—not pop, not R&B. But Motown nailed our sound, it was like Disneyland there, everyone was so talented. The producers were competitive and while we didn’t have to ‘beat’ anyone, you always wanted to outdo your best friends.”

Fakir admitted that it is “bittersweet” to be the last surviving member of the group. “You know, Lawrence Payton’s son Roquel replaced him when he passed,” said Fakir, “and we would all sing together and Theo [Peoples of the Temptations] was a best friend of ours, so it’s still as if we sing as a family.”

Wilson admitted that her career has taken an arc as all of the Supremes initially took turns singing lead until Gordy placed Diana Ross in that role, “while Florence [Ballard] and I did all of the ‘ohs’ and ‘ahs’ and ‘baby, baby, baby.’” Ross left the Supremes in 1970 but the group stayed together until 1977, Wilson the only consistent member to have remained with the Supremes from beginning to end.