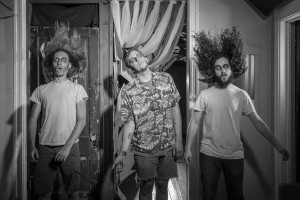 Was 2013 the year of Oozing Wound? The first 200 copies of the metal band’s Thrill Jockey debut LP arrived to record stores wrapped in a blood-red silk-screened print, flames shooting out of a cratered eyeball, music contained therein thrash enough to earn the name “Retrash,” every bit as glorious as it sounds. If tracks “Autopsy Turvy” or “Sustained By Hatred (Rambo 4)” sound familiar, 2012’s “Vape and Pillage” tape may have turned up in your collection, a welcome addition to any fan of smart speed metal with a sense of humor. Hence the type of gross fun one encounters when Googling their drummer’s record label “Rotted Tooth,” a local mainstay for the best punk-metal oddities around. Despite Oozing Wound’s “get high, fuck, destroy” credence, it’s clear that guitarist/singer/songwriter Zack Weil, bassist Kevin Cribbin, and the aforementioned drummer Kyle Reynolds have their shit together, fostering some of the most engaging music in Chicago, whether performed by themselves or by their Rotted Tooth label-mates. If built-in acclaim makes it easier to root for the band, take note: it’s not everyday that Thrill Jockey agrees to release a record by local metalheads. Chicagoans of all stripes can get behind the anti-Big Apple barnburner in “New York Bands,” with Weil shredding his vocal chords and guitar strings with competing fury. That the track contains an outright rebuff of Pitchfork’s judgment somehow went unnoticed in a recent positive review from the website, but no matter; on New Year’s Eve, Oozing Wound will cap their almighty triumph in the best way possible, by celebrating with the community of fans, friends and family that they’ve done proud. (Kenneth Preski)