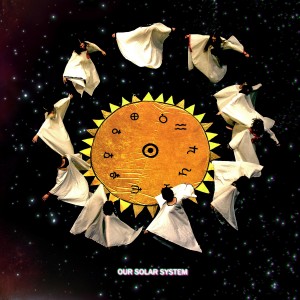 The transition from static structure to impulsive improvisation is a tricky leap. Most musicians obey either one method or the other, lacking the immense skill and range required to jump back and forth. Given that Sweden’s Dungen is a band with a knack for executing careful compositions, psychedelic without being aimless, structured without being suffocating, it comes as a surprise that their bassist Mattias Gustavsson would opt to create a ten-piece ensemble to explore the outer limits of his craft. Though he insists the group is leaderless—they all don white cloaks on the cover and on the gatefold photo to underscore their uniformity—the rhythm section is the pivotal force anchoring the impromptu sets. The vinyl-only release is split between two recording sessions featuring different players that somehow manage to achieve the same effect: orchestral rock with ethereal aspirations. The effort succeeds in large part despite the confusing cosmology (the asteroid belt is awarded an astrological symbol, there is a Hebrew astrology chart backed by verse from a Persian poet on the record sleeve) and one must credit the achievement to a group of talented musicians intent on subsuming their egoism in favor of collective expression. Whether or not the appeals to outer space were necessary to make the case is up in the air, but it seems cool, and perhaps lends some sophistication to vocalist Billie Lindahl’s exceptional delivery, her voice wavering atop the swirling sounds of a violin, flute, saxophone, and synth. At no moment does the album give way to chaos, a tempting trend among musicians aiming for compositional freedom. After all, the music suffers when too much is communicated at once. Perhaps this is the real gem of truth that propels Our Solar System. Or maybe it’s just the document of a fun party that the locked groove at the end of the record ensures will never end. (Kenneth Preski)

“Vårt Solsystem”
Our Solar System
Beyond Beyond is Beyond