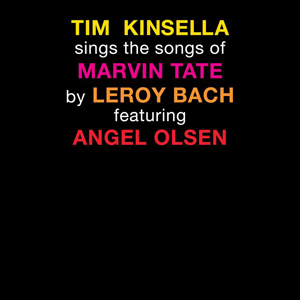 Tim Kinsella helms Joan of Arc, LeRoy Bach was with Wilco at their creative peak, Angel Olsen is on the cusp of indie stardom, but Marvin Tate? Who is Marvin Tate? The man responsible for writing each of these thirteen songs is the least known of the otherwise reputable quartet. Somewhere in the cracks between his race-exploring appearance on “This American Life,” his freakness embrace on Def Poetry, and his semi-regular outings as bandleader of early Funkadelic infused D-Settlement, Marvin Tate is too many things to distill. To be sure, he’s a Chicagoan, just like everyone else on this release, save Olsen who has fled the city to foster a career in the ascendant. Apart from Tate’s stated résumé, his work has yet to break the art world open, but such is the fate of the self-proclaimed poet. Where Tate disregards rhyming in verse, he favors the brutality of truth, which sits well with Kinsella. Opener “Idolize” announces Tate’s tendency to tempt fate, as he withstands a barrage of untoward behavior at the hands of his idol, only to reinforce his loyalty. Bach backs Kinsella’s howl with minimal fuss, opting for skeletal piano arrangements that offer him a singer/songwriter outlet with all the idiosyncrasies of a Burt Bacharach composition and none of the kitschy frills. It’s a cold, hard affair that crystallizes with “All In My Head” somehow sounding all too familiar from the mouth of a wry, self-deprecating Kinsella: “If this is a joke then hand me a rope and get out of my head!” It’s a minor manic masterpiece, though nothing compared to “Sidetracked in Miami,” the sole song that Olsen sings lead on, her true comfort zone. The tune is a thick, textured foray into Florida’s humidity, Olsen channeling Chan Marshall as Tate’s lyricism draws his grandparents via postcard into the world of a divorced, womanizing investor he’s met who thinks he knows him from a past life. To hear Olsen sing the phrase “he believes he knows me” over and over again, imbued with an unmistakable sense of nostalgia, is as near to perfection as her budding recording career has come, and forgives any shortcomings her harmonies may have otherwise had on the remaining tracks. By the time the album comes to an end, Tate still won’t be a household name, but the fact that it took three strong Chicago personalities to match up to his own creative output is as good of a sign as any of his continued resilience and relevance in the Second City. (Kenneth Preski)