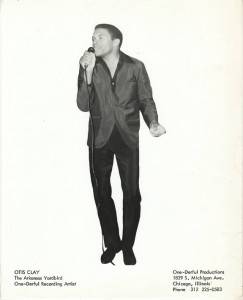 Tracking down any Otis Clay recording and tossing it on the ol’ turntable is gonna yield a pretty distinct experience. During the sixties and seventies Clay flitted from imprint to imprint, cutting sides but only issuing a few albums. Sticking to the singles format enabled the singer, who was raised up through the ranks of gospel, to turn out a significant amount of work in secular and religious mode. Of course, after hitting Chicago, transplanting himself from Mississippi, the industrialized Midwest came to bear on his output. But heading back down South to record sides for Memphis-based Hi Records, the same label Al Green and Syl Johnson were connected with, resulted in Clay hooking up with the imprint’s rhythm section. And it’s on those sides—compiled for the 1972 “Trying to Live My Life Without You” and its follow-up “I Can’t Take It”—on which Clay distinguished himself. Over production not dissimilar from what Green worked with, Clay laments bad love and awkward situations; the meaning of love and the trajectory of human relationships. Ultimately, the singer finds himself disappointed. There’s no easy connection between that first Hi collection and the latter, released in 1977; just a low-end similarity and Clay’s voice. But by that time, disco had already insinuated itself into America’s consciousness, supplanting other dance musics and leaving a generation of performers on the outs. Clay, though, persisted, occasionally shifting back to the gospel music that he came up on. During that time, too, he cultivated an international following, which still thirsts for more—he’s issued a few live dates recorded at various soul summits abroad. But Clay’s not a museum show, working out the solemn soul and devotional music he initially invested in during the fifties. His latest work, “Truth Is,” comes off as desperately slick when compared to those classic Hi sides. But Clay’s voice remains a brisk reminder of the Windy City soul that once entranced radio listeners for a brief time in the not too distant past. (Dave Cantor)