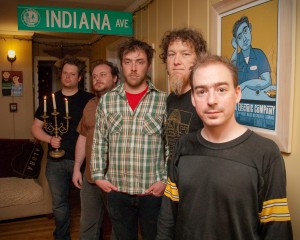 The freeway twists past seemingly endless trees as the guitarist discusses his tenure in Jason Molina’s Magnolia Electric Co., a group as mercurial as its frontman, spurning players and welcoming new voices when its leader felt it a necessity. Evans Groth remembers his friend—Molina died March 16, 2013, reportedly from complications related to alcoholism—as a talker. Someone who was capable of worldwide friendliness, but who was also an intensely emotional guy. People didn’t drift away from Molina; he just had shit to tend to and split.

Suddenly, it all went down

“I met him in Bloomington, right around 1997, when his first record came out,” Evans Groth says. “I worked at the student radio station [at Indiana University] and I remember playing that record a lot. It seemed like otherworldly music to me. … So, when I found out it was him—I think a lot of people’s reaction when they saw Jason the first time was, ‘Jesus, it’s that guy?’ And the second thing is, he talks a lot.”

But that was several years after Molina began corralling songs for a career that’d span about sixteen years and hundreds of compositions—some didn’t make it to tape. Some did and were promptly set aside.

“[Jason] was playing some of the songs that [would be] on ‘Hecla & Griper’—but on bass through a distortion pedal,” Geof Comings, who played drums on early Songs: Ohia recordings, says from his Pittsburgh home about hearing Molina play for the first time in the early 1990s. “That’s all he had. … He was the bass player in his high school metal band, and I don’t think it occurred to him yet to play a different instrument.”

Comings says when the two met in Oberlin, Ohio, a college town about an hour southwest of Cleveland, he’d never heard songs like that before—structurally and lyrically, it was something new. The indefinable quality to all those songs was as difficult to pinpoint as figuring out what city Molina called home.

“[Jason] would probably tell you he moved, because his wife moved. But he was just a wandering spirit,” Evans Groth says. “He was a restless guy, so he did just pack up and leave. … Early on, I had no idea where he was going—I guess he was touring, but then all of a sudden, he’d be in Chicago again.”

There was “temporal quality” to being a part of Songs: Ohia and Magnolia Electric Co., he says.

Each stop on Molina’s itinerary served to introduce a new spate of players to his troupe and might help explain the wildly divergent styles his recordings embraced. An uncertainty courses through both Songs: Ohia and the Magnolia Electric Co. catalogs—a folksy vibe’s replaced by features solemn and gothic. 1998’s “Impala” bears little resemblance to “Didn’t It Rain” from just four years later. And even that latter disc couldn’t fully prepare listeners for the departure of 2003’s “The Magnolia Electric Co.”

Quicksilver changes can be the hallmark of an indelible performer, and that’s how it was for Molina. The transitional recording, bridging the two ensembles, is a clutch of country rock lined with Midwestern modesty that bolsters even Molina’s earliest work. It’s hardly flashy, but overflows with wry observations and personal reckoning. Mike Brenner’s lap steel mirrors Molina’s contemplation: languid and forever flowing. Opening and closing the disc with seven-minute vignettes might have been a calculated move, but those bookends constitute some of the Ohian’s most emotive and heralded moments on record.

“The first time I played ‘Farewell Transmission’ (live) was in early December 2002 as a three piece,” Evans Groth says. “And I remember the way the audience reacted to that song—a song they hadn’t heard before—and how powerful it was.”

“When ‘Magnolia Electric Co.’ came out, I thought, ‘Motherfucker, I’m a moron.’ I would have loved to have played those songs,” Comings says, reflecting on his departure from Molina’s harem of performers. “But I was ready to move on. And after hearing ‘Didn’t It Rain,’ it might not have been as good with me. … He just found the people he needed for the right album, at the right time, in the right place.”

The right place was frequently just wherever Molina was. The morning after a show, the band would head back to whatever venue they’d played to pick up their instruments. Sometimes the bandleader would break out a four-track and record sketches of things he’d been working over in his mind, Comings says.

A trove of demos might be sitting around. And maybe one day, adherents will get a chance to listen in—an opportunity to hear what Molina was crafting and what form it could have taken. It’s the last avenue for his legacy to be enlarged. But at least there’s this chance to hear his compositions realized by the folks who helped record and perform portions of his canon.

“The main thing is, he was hilarious and always forward thinking,” Comings recalls about his friend. “And hopeful.”