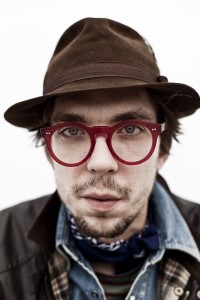 Easy tasks tend to lose value. Perhaps this is why the artistic legacy begetting Justin Townes Earle lacks luster among those seeking to place his work—it takes little skill to connect the dots of his lineage. One cannot escape mention of his father Steve Earle, nor his father’s mentor Townes Van Zandt. In turn, Van Zandt credited Lightnin’ Hopkins with a definitive influence on his guitar technique, while for Hopkins a chance encounter with Blind Lemon Jefferson forever altered his outlook on the blues. Thus through the output of Justin Townes Earle, listeners embrace a heritage that extends deep into the heart of American expression, spanning an entire century from the earliest blues to contemporary country, tracing the Mississippi River and its tributaries from Houston to Memphis and back again. It was wise then for the Chicago Bluegrass and Blues Festival to place Earle’s performance at the center of their programming. His presence evokes a certain timelessness, his lanky stature replete with stomp-ready boots the perfect echo for his steel-tinged voice, a hoarse timbre that owes as much to tradition as it does to drug use. No doubt the pressure is overwhelming on Earle, whose third outing “Harlem River Blues” remains his finest, a release punctuated by a single featuring Randy Newman’s “Louisiana 1927” as the b-side. Earle’s a cappella take offers all the delicacy of an orchestral player, capturing the complexity of a political landscape in an environmental disaster with the subtle sadness that pervades much of his output. To be sure, Earle’s latest album, “Nothing’s Gonna Change the Way You Feel About Me Now,” suggests a continued struggle to establish a liberating identity, but with ancestry so rich to draw upon, the conflict may be less of a problem and more of a blessing than he realizes. (Kenneth Preski)