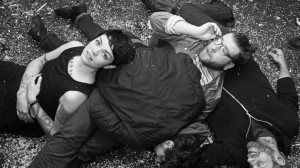 What’s in a name? Perfect Pussy are not the first band to evoke the female anatomy using that particular nomenclature, nor the most shocking, though their use may be the most meaningful. Meaning, truth, honesty, these are the hallmarks of singer/screamer Meredith Graves, who derived the name as an antagonistic form of optimism—a rejection of gender specific self-criticism. Her lyrics follow suit, a platform for feelings on interpersonal relationships, on sex, on internal peace. Confrontation via explicit language is not a new tool for an American artist to employ, yet Graves and company have found themselves on the receiving end of some powerful publicity anyway. As of this date the group has one release, an actual demo tape, four tracks in length, each assigned roman numerals, each of questionable engineering quality. “I Have Lost All Desire For Feeling” is an ode to hardcore punk; drums, bass, and guitar moving with a frenetic energy that the bombast of low fidelity recording serves to accentuate. That the band has made an impact wide enough to make a Midwest jaunt possible highlights two important insights. The first is that the songs are good. Very good. It’s been two decades since Minor Threat created the blueprint for this type of expression, and yet the sound is still as shocking and visceral as ever. The second is that perceived authenticity is at a premium in our culture. Led by Graves, the band managed to secure both booking and publicity agents by producing a single tape recording, which leaves much to say about the nation’s hunger for the genuine article. Punk is a finicky genre, one that has the misfortune of favoring the male perspective. Whether Perfect Pussy is the real deal or just benefiting off of a long-awaited sea change in the culture remains to be seen. The next few months will dictate the outcome of that debate, a rare occasion where audience and artist share true equal footing. (Kenneth Preski)