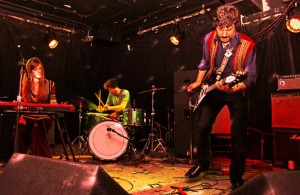 Steve Krakow is an impossible figure to miss in the Chicago psych scene. Operating under the alias Plastic Crimewave, Krakow has served as writer, illustrator and radio personality for his explorations into the “Secret History of Chicago Music,” while juggling his time as a prolific musician and booking agent for the Million Tongues Festival and the Chicago Psych Fest. The latter is now in its fifth year, with the three-day affair offering a Friday feature in Moonrises, a group of moonlighting musicians that includes Krakow’s manic guitar playing laid atop the formidable free-jazz drumming of Tiger Hatchery’s Ben Billington, and nuzzled against the throb of Libby Ramer’s organ. The trio’s 2013 effort “Frozen Altars” owes as much to early Spiritualized (check the slow drone distortion melody on “Radiation”) as it does to The Doors (“Lorelei’s Grasp” includes the ghost of Ray Manzarek’s organ.) That these comparisons are possible is evidence of the project’s pop leanings, a marked departure for Krakow and Billington in particular, both of whom have cemented their hard-earned status in the city’s experimental scene over the course of the past decade. While the signposts of obscure reference points pervade Moonrises’ sophomore release, all its strengths are in its relatability, and with such deep reach, one expects the demise of Krakow’s Plastic Crimewave Sound will be a welcome boon for a group that thrives off of ambition rather than insularity. Scheduled to perform halfway through the evening on the middle night of the festival, it seems the Chicago Psych Fest has found its heart in a band with as much potential as appeal, holding it down for the hometown freak in us all. (Kenneth Preski)