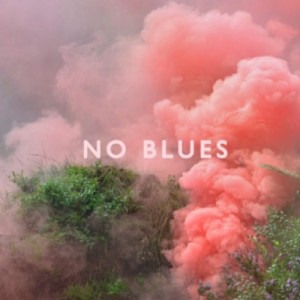 “No Blues,” the deceptively-titled fourth album from Welsh sextet Los Campesinos!, is actually bursting with blues: there’s tons of death here, double-shots of depression and lines about wearing a dude’s head like a hood. No blues? Whatever you say.

The first album by Los Campesinos!, “Hold On Now, Youngster” (2008), was as energetic as a puppy and about half as dark. With manic hooks, bedroom synths, and the sugary call-and-response vocal pairing of Gareth and Aleksandra Campesinos!, the album was arguably the last great twee record of the aughts. Try and listen to “Death to Los Campesinos!” or “You! Me! Dancing!”–two indie-pop classics, by now–without actually dancing. Go on.

Their manic charm stayed intact on their next two albums, “Romance is Boring” (2010) and “Hello Sadness” (2011), but they also added a little more heft to the efforts–both sonically and thematically. The group, as critics are wont to say, matured.

“No Blues” is their most mature album yet–and hands down their best. It’s got the melodic, circus-y pop songs they built their name on–single “Avocado, Baby,” comes to mind–but move further into lower-key electro-pop often here, as heard on the anthemic “Glue Me” and the dark “What Death Leaves Behind.”

Lyrically, Gareth Campesinos! finds the right balance between his clever impulses and more straightforward, serious sentiments. Like Morrissey–a clear influence who gets a nod here in the homonymic-titled “Cemetery Gaits”–Gareth (given name Paisey) doesn’t hide his literary bent.

“There is no blues that can sound quite as heartfelt as mine,” he sings on “As Lucerne/The Low.” “Lamented at the gorge of the river, I watched it weep its banks dry.”

And that’s what defines their new record: though it’s still fun and coy and exuberant and proud of how smart and coy it can be, it is, more than any other Los Campesinos! offering, heartfelt.

It nearly didn’t happen; founding member Ellen Campesinos! left the band in 2012, and the group nearly split up. What a shame it would have been if they did. “No Blues” signals an already successful band hitting a new stride. It wouldn’t be at all surprising if this record lifted them from indie critical darling status into a more mainstream fame. (Eric Lutz)