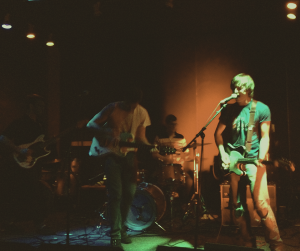 Easy tunes at an easy tempo for Chicago’s Clearance draws clear comparisons to Sebadoh and Pavement, a carefree joy spread over the four (and a half) tracks that comprise their debut seven-inch. Equal parts melodic and nostalgic, “Dixie Motel Two-Step” announces the arrival of a band with little regard for overt rockism, guitar solos kept at a minimum, chunky chords slathered atop rumbling rhythms, an effortless effort if there ever was one. Which isn’t to deny the craft of these young men; it takes a certain cool calm demeanor for Mike Bellis to deliver lines like “I heard you been hung up on the wrong advice / but if it don’t work once, make sure you do it twice,” and not cop to the wry sense of self cultivated by an entire generation of lo-fi indie loyalists. What saves the seven-inch from becoming mere nineties mimicry is its persistent dedication to songcraft, each track sharing a common vision, unfettered by the garage-rock tropes of their peers. Clarity and brevity make for a clean listening experience, relaxed but not lazy, as unforced as it is uninhibited. Less than a year later and Clearance is back with another seven-inch, this time with greater confidence and better guitar tones. Not so much changing the formula as refining it, the “Greensleeve” release poses a new challenge for the group: how to cultivate progression while remaining faithful to their natural affinity for unpolished expression. The tension yields some interesting moments and posits Clearance as a band worth following as much for their familiar sound as for their playful embrace of rock ‘n’ roll’s noblest pursuit: down-home music for the hometown team. (Kenneth Preski)