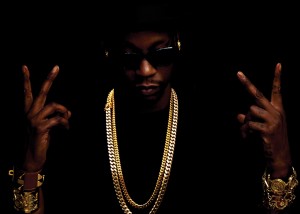 2 Chainz, known for his ever-ubiquitous guest spots (he even made an appearance in Adidas’ latest Derrick Rose commercial), is not your typical hip-hop star. His uncanny knack for caricature work within the genre evokes the early-2000s surge of brief-speaking hype man Lil Jon, but the reality of one Tauheed Epps is something quite different from what he projects. A 4.0 GPA college graduate, Mr. Chainz’s outrageous public persona is likely more of an industry calculation—and performative satire—than the sort of legitimate homegrown silly-riling that most are buying. Paired with Pusha T, a fellow expert in the parafiction of rap—perhaps the American cultural prism in which authenticity is more scrutinized than any other—with his ceaseless did-he-or-didn’t-he braggadocio regarding a former life selling industrial amounts of cocaine, this Chicago Theatre performance should make for a top-shelf dose of opiate lying on lines between the synthesized and the truly moxie-rich. When either of these artists are at their best, however, such delineation becomes blurred to the point of meaninglessness. Flair and ego of their make has paved itself quite the wide lane within the roads of mainstream folk heroism, and we should engage these men as neither sociological quirks nor master fakers, but as what they are: raconteurs of the excesses we’ve come to want. (John Wilmes)