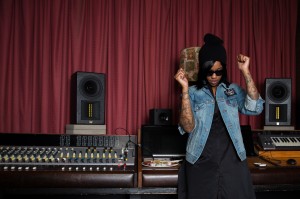 It isn’t easy to pinpoint the heart of hip-hop.

With as many perspectives on the movement as there are practitioners, each point of view becomes a way to propel the music forward. And for about a decade, Chicago’s Psalm One has been combining the culture and a desire to better community.

Taking her passion for knowledge to the recording booth and transitioning into the classroom is a move too few performers attempt. Psalm’s worked with America SCORES, a mentoring program, that’s taken her on a nine-city tour and resulted in the 2012 “Child Support” album—a clever play on words and stereotypes. Her newest release doesn’t include contributions from students, but the release party for “Hug Life” is doubling as a way to raise funds for the MC to visit Haiti and introduce the tutoring program to a new place.

Her background in science gets referenced in most of her work, from the 2004 Birthwrite Records release, “Bio: Chemistry II: Esters And Essays,” through her upcoming album, the first credited to Hologram Kizzie.

The pending album is the first to be released under this particular name, but Psalm points out that it’s not uncommon for MCs to truck in a series of aliases. DOOM’s been King Geedorah, and RZA became Bobby Digital, so that particular caveat of “Hug Life” isn’t too remarkable. But what Psalm One does on the release is. It’s unquestionably marked by recent experience and, as always, offers up some weird notion of the genre and life in its broadest terms.

“‘Free Hugs’ really marked a new beginning for me and a new thought process,” she says of the EP that’s been reimagined for this new long-player. “So, I wanted to nod to my past and look to the future—that’s why I put ‘Hologram’ on there.” 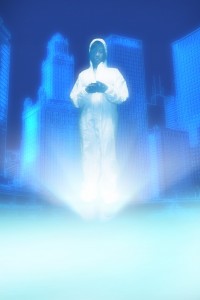 And they make her laugh. Specifically, Hologram Tupac.

“It’s just funny, even when will.i.am did it—it’s so futuristic, but we’re still working out the kinks,” she says of the technology. “It’s like a bad science-fiction movie.”

Before holograms brought back storied rappers and were being used as election-cycle props, Psalm One was a part of the Nacrobats crew—a Chicago clique of performers that included Pugslee Atomz, The Opus, Infinito 2017 and a handful of others who haven’t necessarily seen talent equate with success. “All Ways,” the troupe’s lone, long-playing 2003 artifact, bears little sonic resemblance to the work Psalm’s putting down now. But the Chicago crew’s recorded output marked her arrival, as a featured guest on several tracks, including the particularly offbeat “Pendulum.”  Everything from her flow to the beat selection insinuated her future works would be less beholden to contemporary tastes than to ideas whirring around her science-sodden mind.

“Nacro and the shit we were doing—we were doing as good as we could have. I got asked by Hieroglyphics to do a project,” she says of the Bay Area crew that would wind up contributing a producer to her newest effort. “In my circle, I had my pick of labels to work with. From the outside looking in, a lot of people might think that some bigger entities in the city should have messed with me, but it’s all relative.”

Gamelan chiming opens “Mike Bivens” from “Hug Life,” which is being released through the local Bonafyde imprint. An oblique reference to Black Sheep’s “Similak Child” finds inclusion, as Psalm raps more aggressively than Nacrobats’ recordings could have hinted. That sort of versatility, she says, comes from spending time in the Bay and hosting shows amid dubstep’s rise in popularity.

“In the scene, DJs and producers are way more important than the vocalist,” she says of the once-cloistered music. “It taught me humility on the mic; how to weave my words better … You got to know when to back off. … It takes a really adept rapper to be able to shine on those type of tracks.”

The pair of Hologram Kizzie recordings come after both the “Woman at Work” series and the “Get in the Van” releases. The cohesion of those efforts points to the MC’s desire to find some conceptual stance to scaffold her music. But broaching the subjects she does here—the dank scent of sex wafts off a number of tracks, for example—is another step away from what she voiced during her Nacrobats’ tenure, those other independent releases and a 2006 Rhymesayers offering.

“The whole thing was an exercise in getting out of my comfort zone,” Psalm says. “I have a good skill set, so I can adapt to things.”

Enduring desire to advance the techniques she’s developed in hip-hop’s underground isn’t what she aims to teach to those students in Haiti. Just her compulsion to succeed.