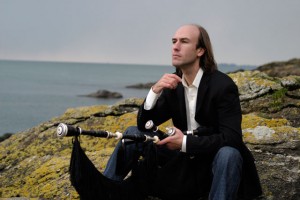 When you think about Celtic music, you probably think of someone from the Scottish Highlands, Ireland or maybe France, but you will definitely change your mind when you hear the sounds of this talented musician from Galicia, Spain who has collaborated with the likes of The Chieftains (he was considered their “seventh member” when he worked with them), Sinéad O’Connor, Mexican-American band Los Lobos and Ry Cooder, to name a few.

Carlos Núñez is a virtuoso of the gaita, which is the Galician version of the bagpipes (another take on the instrument is also widely used by folk musicians in Italy). His style could be described as a blend of flamenco, Spanish folk, jazz and Celtic music with a contemporary, almost pop-like feel. His band’s arrangements are highly percussive and include instruments not commonly associated with Celtic music, such as Spanish guitars, electric bass, horns and Latin drums.

In a live format Núñez has fantastic energy and creativity with his improvised licks. He plays his gaita with the demeanor of a rock guitarist–which is probably why some of his fans have nicknamed him “the Hendrix of the bagpipes.” His band, which is rounded out by Stephanie Cadman (fiddle, step-dancing, vocals), Pancho Alvarez (medieval guitar) and Xurxo Nuñez (percussion), has great chemistry together. This is definitely something to discover if you haven’t yet done so. (Ernest Barteldes)