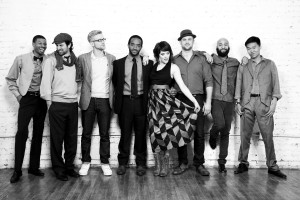 The Chicago-based octet Sidewalk Chalk is far from your ordinary hip-hop group. The band fuses soul and jazz with contemporary beats and insightful lyrics to create original songs and live performances that get even the most conservative of concert-goers on their feet. Their arrangements highlight what each of the band’s members bring to the table. Maggie Vagle (vocals) and Rico Sisney (MC) complement each other on stage as well as they do on tracks, matching energy and emotion note for note. Likewise, while Tyler Berg uses a drum set to keep time, Jumaane Taylor tap dances to add in rhythms and provide a unique flair to the band’s sound. Sam Trump (trumpet) and David Ben-Porat (trombone) make up the horn section. Charlie Coffeen plays keys and Garrett McGinn is on bass. When you put them all together, it’s not hard to understand why Sidewalk Chalk was named “Most Outstanding Group” at the 2012 Chicago Music Awards. The show marks the debut of Sidewalk Chalk’s sophomore album, “Leaves.” Funk band The Heard and DJ Dave Mata open. (Mary Kroeck)