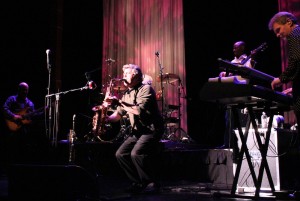 How many bands in the world (any genre, go ahead) do you know that are name-checked in a classic pop lyric? Excluding The Beatles and The Rolling Stones, there aren’t too many (no, “Moves Like Jagger” is not about the band). The odds of a jazz group being included are extremely low, but Spyro Gyra is one of the chosen few–their name is brought up in Jorge Ben’s “País Tropical,” a world music hit that many of his fans sing along to even though most might not have a clue what he is singing about.

Led by saxophonist Jay Beckenstein and keyboardist Tom Schuman, Spyro Gyra has been one of the most influential groups in the jazz-fusion and world music scenes since the band’s inception in the 1980s. Spyro Gyra was also a launching pad for names like trumpeter Chris Botti (who played with them in the 1990s), percussionist Cyro Baptista and vocalist Bonny B. On their latest release “The Rhinebeck Sessions,” the group distances themselves from their recent smooth jazz direction to reach back into their funk/fusion roots, embracing straight-ahead numbers that showcase the group’s individuality. For instance, “Not Unlike That” is mostly built around Scott Ambush’s slap-rich lines and Julio Fernandez’s guitar grooves, while “I Know What You Mingus” gives Beckenstein a chance to show us that he still knows his way around a hard-bopping number.

This year also marks the thirty-fifth anniversary of “Morning Dance,” the band’s most successful album to date, which featured giants like the Brecker brothers and drummer Steve Jordan. The current tour will feature the album in its entirety (which has become a trend of sorts in recent years) plus more selections from their extensive catalog. (Ernest Barteldes)