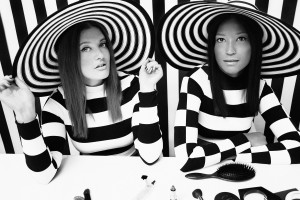 Electronic DJ duo Icona Pop make tracks that sound exactly the way pop music of today should. Run, leap and tumble beats soar through starry, energetic electro-synth melodies, and land on their feet in the foggy midst of a humid, glitter-coated dance floor. When Caroline Hjelt and Aino Jawo met at a party in the suburbs of Stockholm in 2009, a connection surged almost instantly as the two discovered they shared nearly identical tastes in music. Within a few days they were writing songs and booking gigs, and in that same year the two moved to London to cut their first studio record with TEN Music Group. There, they met London’s Charli XCX who shared a song written for her by another Swede, Patrik Berger. The three women collaborated and came up with the international hit, “I Love It.” The song was released as the second single from their self-titled album in May 2012 and again as the first single off of their second album, “This Is…Icona Pop” in September 2013. As for the time in-between, the song’s commercial success flourished. Even if you didn’t seek out Icona Pop at last year’s Lollapalooza, chances are you’ve heard the song’s infectiously cocky hook, “I crashed my car into a bridge/I don’t care” on a video game, cell phone or makeup commercial. The single hit double-platinum status and became an indisputable anthem for the last two summers. Though not all their tracks are as recognizable, Icona Pop’s claim to relevance is as pop music’s favorite badass besties. Their music is the kind you’d expect to hear during warm-ups at your niece’s high-school soccer game—aggressive and fun. Probably why Miley Cyrus asked them to join her on this year’s Bangerz tour across North America and Europe. (Jessica Burg)