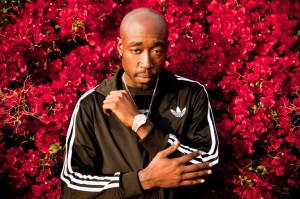 Gang violence, murder, robbery, drug dealing, prostitution: all fodder for Freddie Gibbs on “Thuggin’,” the first single released from his collaboration with Madlib, the world’s greatest beatsmith. The gangsta rapper even goes as far as selling crack to one of his family members to avoid having her go up the street to turn a trick for it. Welcome to Gary, Indiana through the eyes of Gangsta Gibbs, a man who puts the rap in rap sheet. It has to be bullshit, right? Some over-the-top braggadocio to pull one over on record buyers. No one could come through that much trauma unscathed. Given the genre’s many imitators, thug is a costume, and one size fits all. Not according to the man himself: “All that shit is real, man. I don’t have no persona. I don’t have no rap persona. Everything is real and authentic. If I’m talking about it, then I saw it.” Given the criminality of his lyrical content, that’s a chilling confession. Gibbs’ memory is mined for source material during the entirety of “Piñata,” a release which is not just one of the best hip-hop records this year, but one of the best, period.

Under the cloak of Madlib’s unparalleled production, Gibbs embarks on a suite of songs that, once released, will prove to be his signature recording. Madlib’s ability to craft albums of stark originality requires unique talents be used, hence why his previous collaborators on full-length recordings reads like a who’s who of hip-hop legends, J Dilla and MF DOOM among them. Gibbs had an interesting strategy for ensuring his place. “I didn’t even explore the back catalog. I didn’t want to make nothing that sounded like nothing he did before. I wanted to set my own path. Now that I’m done with my album, I’ve been listening to old Madlib shit, and I’m like ‘oh yeah, this shit cool.’ But I wanted to give him something else. I definitely didn’t want to make nothing that sounded like he had already did.” The gamble paid off. Gibbs’ versatility is in full effect as he delivers line after line of hood wisdom from a stick-up kid with crisp confidence, double-timing his delivery as needed, ignoring the radio demands for a hook and clean content, and coming out the other side with his integrity intact.

Coming from Gibbs, the controversy is conversational. On “Uno” he even acknowledges that he’ll probably get murdered for some of the shit that he says. After relocating from Gary to Los Angeles, one would assume he’d get a reprieve from his past, but this is not the case. “I know for a fact that it’s a thin line that I walk here. I’m really in the streets, and making music about my authentic life. You’re walking a tightrope, certain things you can say, and certain things you can’t say. I know I probably said things about people and incidents that if people that were there, or in the situation heard it, they probably would want to murder me. Or somebody gets offended by something I say, be it a gang reference, street reference, anything. I got enemies. I got enemies on the other side, and in other gangs, that wanna do shit to me, Fred, the person, not just the rapper.” That Gibbs finds it necessary to make the distinction is evidence of the state of rap today. Performers don the facade of a street life that is marketable, not one that actually causes them to wake up in a cold sweat. For Gibbs, it’s life or death. “Stuff is real, man, like someone could kill me walking out my front door today, for something that I did to them within the past ten years. I don’t know. I just pray on it, and hopefully God will walk with me through that, and forgive me for my sins, my transgressions. I definitely did a lot of things out of desperation at a certain point in my life.” Gangsta rappers may be a dying breed, but the streets are just as alive as ever. 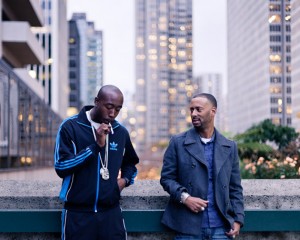 Thankfully, times for Gibbs have become less desperate. “I was going through a lot while I was making this record. I was definitely going through a career transition. You can tell. With this record, when I started making it, I was broke, and when I finished making it, I was rich.” For the uninitiated, the sentiment might seem over-confident, but Gibbs’ career has been in peril since his deal with Interscope fell through in 2007, forcing him to begin self-releasing his work soon thereafter. His successes have been shaped as much by innate ability as by environmental constraints. “No matter where I’m at, I get down and do what I gotta do, be that in Gary or LA. I’ve had my run-ins with gangstas and police out here as well. There was points out here where I didn’t have any interest in my music, where I was just in LA selling cocaine. So I had to get up out of that. I came here to definitely better my life. That shit is not a fairy tale, you don’t just come to Hollywood and get all in the rap game. That shit don’t work like that.” While that’s certainly the case, as recently as 2012 Gibbs had been signed to Young Jeezy’s CTE label. Things did not end amicably, as evidenced by the “Piñata” highlight “Real,” possibly the best diss track this side of Jay Z’s “Takeover,” which receives a clear nod from Gibbs in the thinly veiled threat “don’t make me expose you to those who don’t know you.” Young Jeezy gets torched in the second half of the tune, with Gibbs repeating the acronymous title “remember everybody ain’t loyal.” Lesson learned.

In the present, Gibbs is in the ascendant, with this release bound to break him to a much wider audience. The wisdom of past experience offers the type of perspective most listeners couldn’t fathom. “Be up all night, acting up, manufacturing drugs. Be up all night, waiting on a motherfucker to get home so I could rob him and take what he got that counts. I been there. I been on my last leg. I been to the edge, to the point where it’s like ‘fuck, do I want to kill this motherfucker, or do I want to kill myself? Do I want to deal with these consequences that I’m about to create for myself, or do I want to just end this shit right now?’ There was points like that. Through the grace of God, I got through that.” Thanks to the grace of Gibbs’ music, we won’t have to.