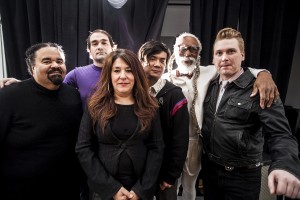 ONO’s singer says he doesn’t listen to its recordings. It’d make him too nervous. Sometimes, travis says, it’s hard enough just to record. It could be because what travis has written clearly comes from contemplation of his military experience; a track called “Army” finds inclusion on the band’s “Diegesis,” set to be released by Moniker Records. And while he says performance was a part of his childhood, taking the stage in church and at school, the whole thing’s still a trial.

“There’re all of these people doing sound and noise that are there, and that’s been the case ever since I started playing in Cleveland,” he says of performing music, as opposed to the poetry he started on in that Midwestern city during the late 1960s. “I think there are a lot of facets to my personality—in Mississippi that’s called character…There is some self-hatred that I have and when I’m on stage; there are all these other facets I can overlay.”

He’s several travises. Each one’s sought some sort of alternating calm and disarray since childhood. He describes a Mississippi adolescence as shambolic, calling his mother a “mad woman” and a “motorcycle mama.” The Navy offered a promise of structure, but didn’t deliver. He’d entertained notions of taking it on the road and dedicating his life to study at an ashram in New Mexico, but a new chaos presented itself during a stop in Chicago on his way out west. It was ONO. And if the band serves as some sort of respite, it’s a noisy one. 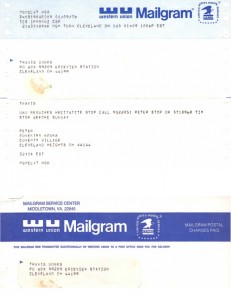 A telegram from Pere Ubu’s Peter Laughner asking travis to perform at an event in 1976, courtesy of Moniker Records.

“My study of art tells me that there’s a place for this kind of anxiety. And when I’m on stage performing it, I find that place,” he says. “It’s the art that allows me to know that I have value.” Others sense ONO’s worth as well. Last year, Steve Krakow (aka Plastic Crimewave) and Matthew Hord reissued the band’s debut album, 1983’s “Machines That Kill People.” Hord says the band’s follow-up, 1986’s “Ennui,” is due to return to shelves sometime this year. “I was just messing around with tapes, but this was a serious endeavor,” adds Priority Male’s honcho, a label releasing glimpses of Chicago’s fecund underground rock scene.

P. Michael, ONO’s other principal member, finds himself gripped by similar stressors as travis. It’s likely a quality, flushed through his songs, contributing to what a subsequent generation of Chicago music-makers understands and connects with. A bit more understandable, then, is the band’s extended hibernation stretching several decades.

“I didn’t like producing the first two albums,” P. Michael says. “And I was glad to find Cooper (Crane) … doin’ sound at the Empty Bottle.” Again, the band’s been embraced by contemporary players, including Crane, who’s best known for recording as Bitchin Bajas and as a member of CAVE. The connection completes an arching feedback loop originating in the early eighties, when ONO’s cohort included Al Jourgensen and the folks in Naked Raygun. An even earlier association with Peter Laughner (Rocket from the Tombs and Pere Ubu guitarist), though, seems to keep travis invigorated.

Back in his Cleveland days, when travis was Travis, he’d occasionally throw on a pink jockstrap festooned with hearts, head out the door and maybe perform poetry at an early Pere Ubu show. Presenting that sort of appearance was obviously gonna rankle some folks on the way to the venue, and a new world of confrontation arose for the veteran. But he says situations like those started even before his costuming did. “Black people have really been very mean to me about what they thought I was, rather than who I am,” the African-American singer says. “And there is no homophobia like the homophobia of Mississippi.”

Since ONO first confronted what folks expected from music, both P. Michael and travis pursued reasonably traditional careers without much consideration of getting back together. But Krakow tracked down the pair for inclusion in his “Secret History of Chicago Music” series for the Chicago Reader. Performances followed, as did ONO’s first release in twenty-six years, “Albino.” That 2012 disc and the forthcoming “Diegesis” entertain similar sensibilities as the ensemble’s work from the eighties. A danceable backbone jerks through the whole thing, underpinned by P. Michael’s clear affinity for Funkadelic. 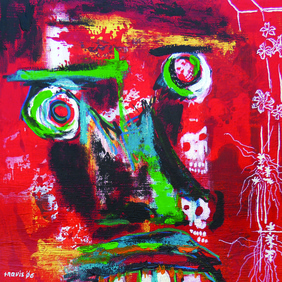 “I think people who can and have led, can follow,” travis says of arranging his recitations around P. Michael’s rattling backdrops.

“What I’m concerned with is that ONO has a clearly defined premise.” It always has. But “Albino” sounded like an album of thoughtful performers who hadn’t recorded in a while, the title track still ranking as some monolithic contribution to utterly distressed music. “Diegesis,” though, is maybe the most cogent statement from the band. “BlackPowerMOVE,” the new disc’s second track, still dispenses that elastic bounce as travis howls down his demons.

ONO’s been able to settle on its sonic mission. So conceivably, the band’s frontman is capable of finding a more significant peace with himself. “I haven’t even started writing about my early world,” travis says, intimating there’s more he needs to reckon with. Parsing our personal histories ripples tumult. But ONO’s rhapsody seems to continually benefit from that stress.

“Diegesis” is out March 11 on Moniker Records.