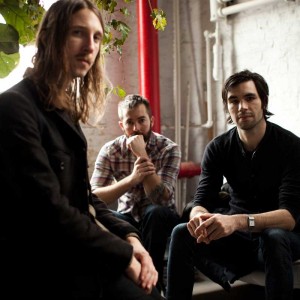 What exactly is “post-metal?” Some fans swear by the term, others loathe it. It tends to be used in reference to bands that appeal to people who don’t have much use for heavy music in any other context. You can decide for yourself whether or not the description quite fits for Chicago’s Russian Circles, but anyone with an appreciation for the layered instrumentals of Explosions in the Sky, or the heavier riffing of Pelican will appreciate this band. Without a singer to tell stories through lyrics, the trio—guitarist Mike Sullivan, bassist Brian Cook, and drummer Dave Turncrantz—create musical narratives through finely crafted arrangements. Songs on their 2013 release “Memorial” move from mournful to angry to majestic with ease, as Turncrantz and Cook provide weight to Sullivan’s soaring guitar parts. Russian Circles puts on an impressively minimalist show, with low, strategically placed lighting illuminating each member while keeping the musicianship up-front and center. Even without a singer or a fancy light show, you won’t be able to keep your eyes off of the stage. Helms Alee and KEN mode open. (Keidra Chaney)