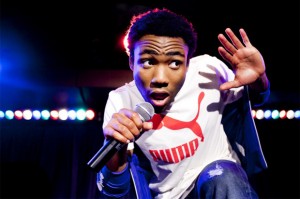 Childish Gambino’s latest album, “Because the Internet,” is the first in the span of his five-year career to receive positive rather than predatory reviews. A project of epic proportions—nineteen tracks, a seventy-five page screenplay, and a short film titled, “Clapping for the Wrong Reasons”—Gambino aims to challenge the way we consume music. In conjunction, the three mediums show and tell the fictional story of a man, supposedly the estranged son of rapper Rick Ross, stuck in a rut of emptiness as he drowns his feelings in celebrity gossip blogs, mansion parties and other destructive behaviors. Having scrutinized Gambino for hiding behind gimmicks in the past, critics seem agreeable this time. Most of all, they’re pleased with what sounds like a realized confidence in Bino’s rapping ability.

It’s no secret that haters have been nipping at Bino’s heels from the jump, when he self-released his first album “Sick Boi” in 2008, in part because Childish Gambino is Donald Glover, who is (or was) Troy Barnes—one of the main characters on NBC’s “Community,” the silly yet imaginative comedic series about a community college study group. For years Gambino was labeled a wannabe, a comedian-turned-rapper with nothing to offer but an assortment of weak self-released albums and mixtapes. Then in 2011, he signed to Glassnote Records and released his first studio album “Camp.” Bino’s anxieties and insecurities are explored throughout the record, the after-effects of growing up labeled an “Oreo” by his peers. Criticized for being overly cathartic, the album still managed to reach an audience who could relate. The only nod from critics was an appreciation for its production aesthetics.

Over the years Gambino has brushed off the knockers in his own way. Most recently, he posted a series of self-deprecating notes handwritten on hotel stationary in which he lists his fears. The posts were seen as a response to the backlash from fans upset with him for what they saw as abandoning “Community” to go on tour. Confessional and raw, they admit that neither Glover nor Gambino has it figured out. The Deep Web tour is the final component of “Because the Internet.” It is designed to further the interactive experience with a free smartphone app, where fans will have the ability to manipulate what’s being shown on the stage’s screens. (Jessica Burg)