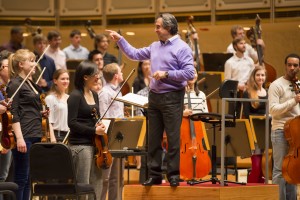 Riccardo Muti’s spring residency goes for two weeks this season, but what a jam-packed and extraordinary period of music-making it looks to be. This first week program includes pianist/conductor Mitsuko Uchida, who last week made her annual Chicago Symphony Orchestra appearance conducting from the piano. Not easy to conduct Robert Schumann from the piano, however, so Muti will be her collaborator for the Schumann Piano Concerto. The centerpiece of the program will be the Schubert “Great” Ninth Symphony, a work that Schumann championed posthumously after Schubert’s death at age thirty-one.

Muti’s idea of a day off that first weekend is to lead the Civic Orchestra, the training orchestra of the CSO that is marking its ninety-fifth anniversary this season, in an open rehearsal of movements from Prokofiev’s ballet suites for “Romeo and Juliet” on Sunday evening. This is a favorite piece of Muti’s and he has a lot to say about how various movements should sound, particularly as they relate to the emotions reflected in Shakespeare’s narrative. To watch him do so with an attentive audience of young musicians working to give him what he asks for is to experience a passing of the torch of the highest order. It also offers a rare opportunity to eavesdrop on the rehearsal techniques of one of the great conductors set to a basic level, a rare and wonderful deconstruction of the art of conducting. Tickets are free but must be ordered and demand is always high.

A rare Muti appearance on the CSO’s Wednesday night “Afterwork Masterworks” series opens his second and final spring residency week, which spotlights the Schubert “Unfinished” Eighth Symphony and the Elgar Cello Concerto with CSO principal cellist John Sharp. This intermission-less program with an early start time includes a post-concert Q&A session/reception in the Grainger Ballroom with Muti and Sharp that will include complimentary wine. The additional work for the rest of that second week will be the Schubert Second Symphony. Friday afternoon’s concert will be followed by a Muti book, CD and DVD signing in Grainger Ballroom (around 3:30pm) but is free and open to all. (Dennis Polkow)