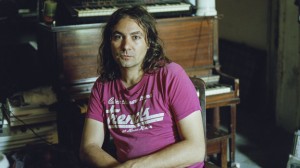 The road is an elegant, shimmering place—always free and steady and pretty—in the hands of The War on Drugs. Gloss is a good sound for lead man Adam Granduciel, whose evocations of Springsteen offer a yearning that’s often absent in his previous work behind Kurt Vile, the zen-master of indie rock, as one of his backing band, the Violators. We are drifting and capable of pain throughout “Lost in the Dream,” the outfit’s latest LP. It is an assurance that a certain type of barn-burner still exists; that the Rust Belt is still packed border-to-border full of romantics who can’t aim their heart the right way; who smolder away against the weight of dead hopes. The album chugs along with the urge to blaze through the threshers of time and humanity, insistent in its sincere attention to the perfectly emotional guitar solo—the antidote to any moment. An insane optimism; my favorite kind of schmaltz. Sway to “Suffering,” cry with a country of fools as Granduciel makes the most of the blue eyes in his veins. It’s going to be excellent, because The War on Drugs has already mastered this kind of jaunt so deeply. They’re the neon in your watering hole, lost delightfully in a genre dream that’s immune to time. (John Wilmes)