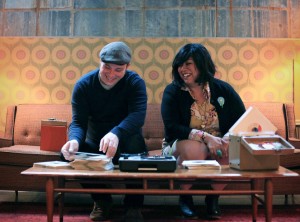 The universal truth that music is best when shared remains unequivocal. For the last forty years, folks have traveled distances far and wide in pursuit of one of America’s original treasures, 1960s soul music. Over weekend-long parties they celebrate camaraderie, record trading, drinking (for some, not all) and most importantly, dancing till the wee hours of the morning. There are two standout characteristics to this little-known tradition, which has come to be known as a Northern Soul weekender. The first is that the songs they play aren’t the familiar standbys most often affiliated with the era—the Temptations or Otis Redding. The second is that you’d be hard-pressed to find anything like it going down on American soil. In fact, you’d have to make the stretch across the pond to England or another part of Europe. That was until Pilsen residents Kevin Jones and Brenda Hernandez held the first ever Soul Togetherness USA event in 2013. This year’s weekender incorporates four nights of free (that’s right, free!) local, national and international DJs, a record swap and Soul Serenade bus tour, making it the only bash of its kind in the States with the exception of Soul Trip USA, a European export.

Over the last decade, Chicago has become reacquainted with these rare soul sounds thanks to the promotion of popular dance events such as soul night at Danny’s, Windy City Soul Club and Soul Summit. While scores of happy patrons equate these irresistible tunes with packed dance floors, most are unaware of the social significance they hold in the UK, where the phrase “Northern Soul” actually originates. The story begins with the mod subculture of the 1960s, which adopted obscure American R&B as part of its scene. By the seventies, all-night soul parties solidified the music as part of a cultural movement. Young working-class men and women and teenagers flocked to dance halls like the Casino Club in Wigan, a town in northern England, to lose themselves in a kind of soul that differed from the mainstream chart-toppers. The songs were grittier than that of Motown; the vocals less sugary and the production quality low-budget. These songs were made in small-town recording studios by groups of unknown African Americans desperate to tap into the success of the trend. Only a hundred or so records, or in some cases, a handful of demos were pressed of these obscure forty-fives, making them even more desirable to young Brits. While many of these groups remained virtually unnoticed back in the United States, their music was playing a significant part in diminishing racial tensions between English blacks and whites by bringing them together on the dance floor. A new kind of dance and dress style was another trait of Northern Soul. Breaking away from the formalities of partner dancing, men and women felt the freedom to be more expressive with gents twirling, dropping down into the splits or hoisting themselves up from their palms like Bruce Lee.

It wasn’t until the eighties that America and the rest of Europe began to take notice of Northern Soul. By that time most of the unknown soul records had been snatched up and relocated to the UK. “European and American scenes are much younger in comparison and aren’t bound by the trappings of English Northern Soul nostalgia types. The music is fresher and broader in scope,” explains Jones, who started Seattle’s Emerald City Soul Club several years back before moving to Chicago. Having since bowed out as one of Windy City Soul Club’s regular contributors, he and Hernandez prefer the looseness of the occasional gig here or there. Besides, since last year’s STUSA, the two friends have spent most of their free time (Jones is an art director at an advertising company and Hernandez is the youth art coordinator at the Yollocalli Arts Reach in Pilsen) getting 2014’s event off the ground. Correspondences with DJs, venues and accommodations, as well as curating the STUSA Tumblr and website, has drawn what’s expected to be a successful turnout, somewhere between one- and two-hundred people. Many of whom, in proper weekender fashion, are traveling to Chicago from out of state and some from out of the country. “At last year’s Soul Togetherness, there was one woman who flew in from Paris. She’d heard about it somehow and flew in for one night,” remembers Jones. It’s that kind of dedication Jones and Hernandez subscribe to. Last summer they made the voyage to the Soul Shakers weekender in Bamberg, Germany. 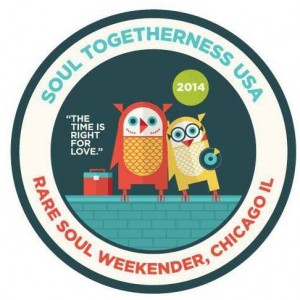 It’s ironic that two Americans should choose to cross the Atlantic for a function dedicated to a genre of music fostered in the very city they call home, but rare soul enthusiasts go where the records are. As Hernandez puts it, “It’s all about what the DJ has in their box and how they put a set together. How they make a song stand out.” It’s the love of a song that bonds DJs and collectors from all parts of the world, and it becomes an inherent knowledge who has what records within the community. Not every collector’s taste falls under the Northern Soul definition. “What sets collectors apart from one another is the way their taste gets refined over time,” says Jones. “There is an evolution to it.” Though STUSA takes its cues from British Northern Soul weekenders, the lineup isn’t narrowed to the genre specifically. Both Friday and Saturday nights, held at The Globe, offer two rooms of music. The main room will host the roster of soul DJs from Chicago and beyond, while the second room will become the Soul of Jamaica room with early reggae, true ska, rock steady and Caribbean cuts on Friday, and the Soul of Latin America room showcasing Chicago’s own Latin soul and boogaloo gurus, Sonorama on Saturday. For Jones and Hernandez, the main goal of the weekend is simply getting folks together. As Hernandez says, “There is no bigger compliment than when the people you love are there to share the music you love with you.”