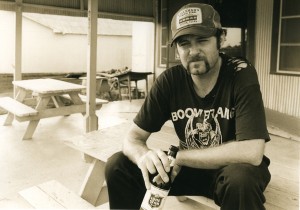 Though Texan Scott H. Biram has released a number of well-received albums and has been performing for more than a decade (amassing a considerable following in that time period) his latest release from Bloodshot Records (“Nothin’ But Blood”) is bringing new fans out of the woodwork. Biram calls his music “the bastard child of punk, blues, country, hillbilly, bluegrass, chain gang, metal and classic rock,” and for once this is not an example of an artist over-selling himself. Despite the first track on his latest album implying that he’s taking it “Slow & Easy,” Biram still preaches as much hellfire as he does redemption with both his lyrics and musical style, following loud, fighting-angry metal tunes like “Church Point Girls” with easy listening bluegrass ballads like “I’m Troubled.” Seeing Biram take the stage alone with his signature trucker hat, the uninitiated may expect a fairly typical country singer-songwriter—but once he gets going, it becomes clear why he’s also known as “The Dirty Old One Man Band.” And just to warn you, in case you get a hankering to ask him at the show, Biram—who once performed a month after a head-on collision with an eighteen-wheeler, with two broken legs, a broken foot and a broken arm—has made questions regarding his middle initial clear: “The H. is for Fuck You.” Fuck yes. (Zach Freeman)