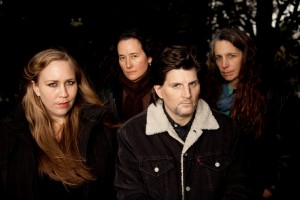 When Black Sabbath abandoned the name Earth, it was left for Dylan Carlson’s crew to assume two decades later. Earth’s mythology and music from the early nineties have proven to be equally formidable forces. Their seminal “Earth 2” is regarded as the first drone metal album, though their stint on Sub Pop is considered the beneficial byproduct of a close friendship with Kurt Cobain. Carlson and Cobain were former roommates, confidants and co-dependent drug users; their camaraderie culminating in Cobain’s suicide via a shotgun purchased in Carlson’s name. Two more albums were issued on Sub Pop, the epic distortion excursions of their genre-defining masterpiece tapered to shorter outbursts edging toward standard song length, replete with a Hendrix cover. And then, radio silence. In recent interviews, Carlson has credited this lost time to a continued struggle with drug addiction and depression, but by the mid-aughts, Earth had begun playing out again, revitalized by the inclusion of Carlson’s wife Adrienne Davies on drums, and supported by the successes of bands like Sunn O))) who owe much to the genre’s forebears. Unwilling to settle on sludge symphonies, Earth veered elsewhere, releasing “The Bees Made Honey in the Lion’s Skull,” an album more drone country than drone metal. While the hues of their harmonies haven’t always remained consistent, the method has: patient, meditative music just as likely to inspire lofty abstractions in the listener as a subconscious slumber. Earth’s most recent pair of albums, “Angels of Darkness, Demons of Light,” were recorded when Carlson was deathly ill with a rare form of hepatitis B, leaving the sessions plagued by the impending sorrow of the possibility that they would be the band’s last. Since Carlson’s recovery, Earth has been teasing the release of a new album as heavy as their oldest material, meaning that earplugs and hearing aids might both be necessary for this gig, depending on the setlist. Earth plays powerful music that is best experienced live and in person, rendering a guttural impact for Carlson’s guitar; the visceral presence of a singular, legendary musician. (Kenneth Preski)