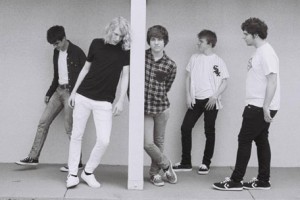 On a Thursday evening in March, the green room at the Bowery Ballroom in New York is stuffed with people, but The Orwells, the band of teenage hellraisers from the suburbs of Chicago, stick out like a sore thumb. In one corner, a photographer announces to the bearded or salt-and-pepper-haired managers around him that he needs to step out to meet up with his ex-wife and son, who happen to live right down the street. In the other corner, members of The Orwells discuss Chapstick addiction, and then lead singer Mario Cuomo, aged twenty, shares pictures of longboard baby strollers on his smartphone.

There they are, the young guys. But the five members of The Orwells carry a sense of urgency that belies the number of years they have ahead of them. “Once you’re past twenty-five or something, your time in rock ‘n’ roll, if you haven’t made it then, is kind of up,” guitarist Matt O’Keefe, aged nineteen, says. “If I were twenty-five and I were living off of Wendy’s or McDonald’s, I would be very depressed with my life. But as a nineteen-year-old I couldn’t be more excited about it.”

If you hold the experiences of The Orwells at a far enough distance, it might seem as if the college-aged rockers went the way of higher learning, like many of their friends from Elmhurst, Illinois. The band gleefully recounts ostensibly collegiate endeavors: drunken weekends, hefty servings of fast food and plenty of chasing after young women. When they get Domino’s pizza, though, it comes with bottle service, and they eat it at the NME Awards instead of a drab dorm room.

“As of now, it feels normal to me,” O’Keefe says of his decision to forego college. “In a few years, maybe, when my friends are seniors in college, and I still haven’t done it then, maybe I’d be like, ‘whoa this is fucking weird.’ But if this were to stop and I were to go to college, I’d be one year behind them, so it doesn’t feel that weird.”

The suburban punks have their chance at a good old-fashioned homecoming on April 1 when they take their national tour with fellow Chicago punks Twin Peaks to Lincoln Hall. The bands’ shared history runs back to when the two played side-by-side in The Orwells’ Mario Cuomo’s garage. “They came and played and they stole the show and were amazing,” O’Keefe recounts. “From then on we just started hanging out with them in the city, and they started to show us what’s cool in Chicago, like what venues are cool and the DIY scene that was in Chicago at the time.”

In the very early days of garage shows, The Orwells put songwriting before landing gigs. This, according to O’Keefe, set them apart from other garage bands in their sleepy suburban town. “We just always wrote songs,” O’Keefe says. “At first it wasn’t even about playing live or covering songs. When we first decided we were going to be a band, it was only about writing songs.”

While O’Keefe seems to have grown into a sort of de facto spokesperson for the band in interviews, Cuomo steals the live show as the band’s lead vocalist. Slouched and staring at his smartphone in the green room, Cuomo brings his tall, lanky frame to life in tangles of microphone cord on stage. Cuomo is joined on stage by O’Keefe and Dominic Corso, aged nineteen, on guitars, and twin brothers Henry Brinner on the drums and Grant Brinner on the bass guitar, both aged eighteen.

The Orwells’ live show seems ever on the brink of a controlled collapse. During that show at the Bowery Ballroom, Cuomo writhed on the ground and took his pants off with the help of swooning audience members, to the tune of loose and energetic guitar riffs. His scratchy howls punctuate the choruses but his voice swings low and fiercely sullen for most verses.

“We kind of leave it up to the crowd as to how the show is going to go,” O’Keefe says. “A bad night for us is either, we’re way too drunk and it’s just a fucking train wreck, or we’re stiff and we just play every single song straight through. I think the best nights that we have are the ones where it’s teetering on a cliff. Is it going to fall off or are they going to stay stable?” 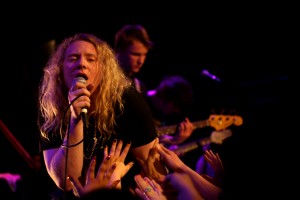 Television audiences around the country were asking themselves this very question when The Orwells took their new song “Who Needs You” to “The Late Show with David Letterman” in January. The polarizing performance featured many standard-issue Cuomo antics—taking a seat on the guest chairs next to Letterman’s desk mid-song and gesticulating on the ground several times— and inspired Paul Shaffer, Letterman’s house band leader, to lay down and do some pelvic thrusts himself after Letterman begged for an encore. “I think they were actually having fun,” Cuomo said of Letterman and Shaffer. “It felt refreshing to them.”

Like the Smith Westerns before them, both The Orwells and Twin Peaks make Chicago look like fertile ground for teenage bands looking to make it big. “I don’t think there’s anything in Chicago’s water,” O’Keefe says. “I could name a thousand bands from L.A. that are younger than us…I think just being our age and going around, I think we’re starting to see the next wave of rock and roll bands.”