Maintaining a sense of journalistic objectivity about Basic Cable is impossible. Beyond band duties, bassist Luca Cimarusti is the music listings coordinator at the Chicago Reader, and drummer Ryan Duggan is a prolific designer whose work includes last fall’s “Art 50” cover for Newcity. The group’s reward for being so intimately involved in Chicago’s music scene has been a local press vacuum for their latest project. Highfalutin ideals are fine fodder for fools and philosophers, and being a bit of both presented the perfect opportunity for me to defy all proper notions of my profession. In short: if local publications must ignore their own for fear of impropriety, then it’s the fool’s duty to challenge the philosophical framework preventing profoundly relevant artists from being properly covered. No problem playing the fool here, I have much experience in this regard with the men of Basic Cable. Two members and me share a hometown. I’ve known Luca as Luke since I was fourteen and bummed rides off of him to local punk shows. I’ve know Michael John Grant, guitarist and primary vocalist, as MJ since around the same time. Knowing what I know, I made sure to eat an early dinner before sitting down for an interview with the group. These guys can drink.

Before I can even hit record, we’re a shot of Jack Daniels and a cheap domestic beer deep. Though we were close as teenagers, we’ve since lost touch, so my questions about the band start broad. Luke clues me in. “It’s five people who all have pretty overblown personalities, and I feel like everyone plays the way they are. Joel [Bednarz] is kinda like a boastful, staggering loudmouth, and he has a really gross guitar tone, and it kinda overpowers everything, and that makes sense. Duggan is the man who is always doing way too much in his life, and he’s a super busy but proficient drummer. Everyone’s personality shines in the way they play, and no one has a personality that kinda just sits back. Everyone’s kind of a dick. (laughs) So it’s dick rock.” The cover art for Basic Cable’s debut LP “I’m Good To Drive” makes use of a funeral wreath to display the band’s name. Ingenuous irreverence, the perfect tone for a punk band. Clearly, they are not over-conceptualizing the outfit. “If there was a concept, it would just be drinking,” offers MJ.

All jokes aside, none of us sitting at the bar in the near-empty room are sentimental. Writing an essay about the joys of catching up with old friends does not interest me. I’ve seen plenty of previous bands that the members of Basic Cable have been in, but none have ever moved me to offer any critical analysis. Yet the group’s debut hits in a unique way, like early Sub Pop releases, more Mudhoney than Nirvana. It reminds me most of one of Luke’s last triumphant messes, “it’s kinda like Loose Dudes…” I begin, trailing off. “But the songs are good,” finishes Luke. We all laugh, and it occurs to me that what really sets Basic Cable apart from a vast majority of working artists and local bands is that they have a sense of humor. “Oh yeah, I think our band is the opposite of taking ourselves seriously,” reflects Luke. MJ continues, “I hate it. It upsets me when people start taking themselves too seriously, at any kind of art, really. When it comes down to it, it’s just art. Sure it’s nice. It can either be life-changing, or a big moneymaker, but it’s all just fuckin’ bullshit.” Instead of embracing earnest, the band opts for honest. 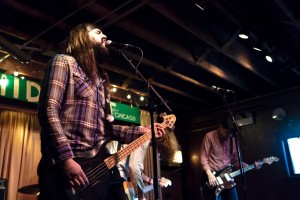 Luke recalls laughing while singing some of their lyrics, in the middle of shows. “Our lyrics are all about real things, and some of them are offensive, but if you look on the insert of the record, all the lyrics are blacked out. That was a very conscious decision, because there might be some people, who if they realized these songs are about them, would be very, very upset with us.” They’re blacked out, but not indecipherable. Every Chicagoan can relate to “Winter Weight,” a snarling ode to those who can’t quite slim down in the warm weather regardless of a new workout outfit. “Tear Boots” provides select quotes from an uncomfortable confrontation synth player Matthew Hord had with a scorned lover of a woman he had previously dated, not realizing at the time that she was already committed. Even the lead track, “Blonde Ambition” tells the tale of previous Dream Teens collaborator Ben Pirani, who dyed his hair blond and left Chicago for New York to pursue a career as R&B alter ego Benjamin. There’s no shortage of potentially offensive material here, all based on stories that the men of Basic Cable have actually lived.

Does the band have any careerist ambition at all? “We have a bunch of new songs written, I’d like to record those,” says MJ, who will be touring as the lighting director for the Black Keys beginning in May, a position he’s held for years. Basic Cable will likely hunker down again with local engineer Mike Lust before MJ’s departure to track songs of objectionable content and carefree sensibility. I start to prod Luke. Isn’t it hard not to conceptualize? As a fellow journalist, you have to notice patterns in the way musicians talk about the craft, in the style of expression. It would inspire me to do something different. “Labeling it as a concept is a bit of a stretch, ‘cause it’s pretty loose, and it was never really discussed. But we’re all on the same page: we’re dudes who live a dude lifestyle, and let’s just convey that through loud, dude-rock.” It sounds stupid, but Luke is smart, and the tone of his delivery during this sentiment makes all the difference. Self-awareness is intelligence, and it’s clear the band has streamlined certain characteristics: reckless, drunk and juvenile, to be sure. I can attest to these attributes firsthand, and have been happy to share in the revelry. Cheers to community, even when it means bending the rules of integrity.