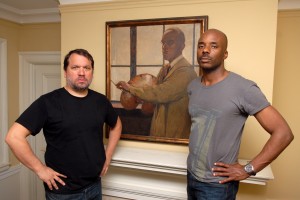 This is how much noise two dudes can make.

In an improvising group consisting of just drummer Chad Taylor and cornetist Rob Mazurek, it’d be assumed that intent listening plays a significant role in how the Chicago Underground Duo put together its works. But the truth, each player says, is somewhere between thought and expression.

“One of the first things Cooper-Moore said to me when I started playing with him is that I’m a really good listener,” Taylor writes in an email from Europe, where he’s touring as part of the Eric Revis Quartet. “I took it as a compliment, but he meant it to be an insult. What I have learned over the years is that it is important to listen, but if you listen too much, everything you play is a reaction to something you’ve heard.”

Mazurek says just about the same thing and recalls another bandleader, Bill Dixon, explaining the phenomenon.

“He’d tell the band before songs, ‘On this particular thing, do not listen to me. Do your own separate thing.’ So, when you tell master improvisers, they understand the concept. And fact of the matter is, you’re gonna hear it played anyway. You can’t turn off a trumpet. …it has to do with the decision of doing something different.”

Determined to crank out something new necessitates the Duo to synthesize a jazz past that it’s engaged, but separate from. Taylor’s played with Iron and Wine among other folks, while Mazurek pushes a fusion of approaches in countless other troupes. Insinuating a wealth of sounds into any composition isn’t a mission statement for the Duo, though it’s a byproduct of each player’s perspective on the craft.

“It just seems that sometimes people get so ensconced in ‘past,’ they’re not able to understand what’s even happening,” Mazurek says. “For me, the concept of a free jazz or a free art form is exactly what it says. A conservative way of looking at that doesn’t push it forward in any way. ”

The Duo wants to blow out the history of jazz. But Mazurek says that in Chicago, the approach occasionally abuts a less expansive view of music. “Boss,” from the Duo’s latest disc, “Locus,” pulls in something akin to a blast beat, as electronics and a wavering horn clash against rhythm. A few tracks on “Yaa Yaa Kole” incorporate Taylor’s tongue drum—sort of a wooden box that resonates sound when struck—run through a series of effects. There couldn’t have been a concerted effort to have “Locus” come off as a collection of scattershot ideas. Detractors might perceive it that way. But it’s just the Duo following its instincts.

“Chad is one of the few people I can get together with, and we don’t have to say a word to each other,” Mazurek says. “We can create some kind of magic.”

As it stands now, Mazurek’s based in Chicago with Taylor living in New York. There was a time, though, that the cornetist decamped to Brazil. And separated by that kind of distance continuously rattles something loose from both performers.

“It’s more than the literal definition—a location of intense activity,” Mazurek says of the new album’s title while discussing how the players’ proximity has influenced its recordings. “This distance, as far as I’m concerned, played to our benefit. Experiencing these different locations, and then when we come together at a specific location, we’re able to unite.”

He describes “Locus” as further evolution, noting that the Duo’s been engaging radical electronics since pretty early in its recording career. 2000’s “Synesthesia” ends with a three-minute array of sounds pulled from whatever devices Mazurek had handy. “Locus” is just as purposefully experimental, but better assimilates those electronics into the Duo’s acoustic practices. 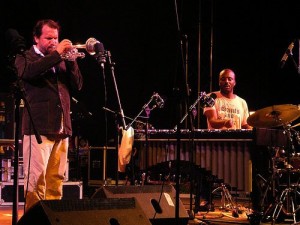 “The things we think can’t work, we’ll try them anyway,” Mazurek says. “What we think won’t work usually works best. That’s the point of pushing the boundaries of what you’re capable of doing—breaking through the conservative nature of yourself in order to find something.”

Since about 1996, the Duo’s been developing and appraising approaches to performance and recording—each album an audio post-it note of then-current driving concepts and influences. With all the projects each player’s invested in, “Locus” and its impressions haven’t had much time to germinate, granting the bandleader little time for studied reflection. But he’s still pretty psyched on the accomplishment.

“I listened to it and then afterward, I was giggling to myself,” Mazurek says. “I’m pretty pleased with it, but I’m still thinking, ‘Oh my God, what have we done here?’”