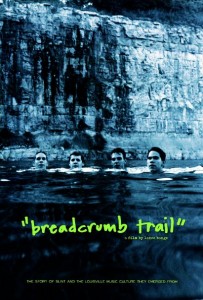 Slint’s documentary film, distributed as part of the deluxe box set reissue of 1991’s seminal “Spiderland” (and screened last night at the Music Box Theatre with director Lance Bangs and band members David Pajo and Todd Brashear in tow for a Q&A), paints the band as anything but pretentious, and offers some unexpected surprises, including belly laughs from poop jokes. That’s some welcome relief from a group whose musical mystique renders critical conversation convoluted by the zeal of fandom. Listeners aren’t to blame; Slint’s intimate sound inspires insight from every variety of interested ear—clearly illustrative of the precocious power unique to a Louisville group that disbanded by the end of their adolescence. Thousands of think-pieces about post-rock later, and the story still resonates with an audience unfamiliar with the particulars. “Breadcrumb Trail” shines a spotlight on everything from what Touch and Go Records resembled in the early nineties, to the pivotal role drummer Britt Walford played in conceptualizing the tone of the tunes. Perched aside a closed door, Walford’s cocked view conjures the same creative tension as early footage of the band practicing in his parent’s basement. Here is a group of scrawny teenagers performing a perfected expression of pronounced elegance, a lovely cadence to post-hardcore’s penchant for abrasion, each band member resigned to a look of absolute boredom and wily intensity. Spliced together alongside slower shots of unrelated idle moments, scenes that evoke Jem Cohen’s “Instrument” documentary, Bangs shows that Fugazi is far from singular in their impassioned take on rock music as artistic statement. Leave it to the kids to turn the corner, even when it’s obvious they are still working around the bend. As the unsatisfying denouement makes clear, Slint is just happy to be among friends again. Unpacking the puzzle is part of the pleasure, perhaps the most poignant takeaway from indie rock savants stuck savoring the sentiment two decades after the fact. (Kenneth Preski)

Slint’s “Spiderland” remastered box set is out now on Touch and Go Records for a cool $150.