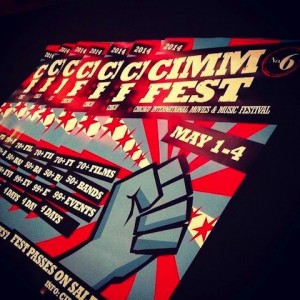 The marriage of movies and music is the twentieth century’s greatest gift to culture. With sight and sound no longer separate, the essence of two distinct art forms united to birth more cultural touchstones of artistic significance than any other technological advancement in the modern age. Films with an unmistakable soundtrack, or musicians with a strong visual presence—the list of seismic successes is too long and too obvious to print. The pairing is so crucial to culture that “audiovisual” has entered our lexicon. So listen up and picture this: when the Chicago International Movies and Music Festival (CIMMfest) inevitably succeeds at their quest to become the Midwest answer to South by Southwest, will the organizers be able to maintain the integrity accompanying independence, or will corporate sponsors weigh too heavily on the proceedings? CIMMfest isn’t big enough to have to bear that burden yet, but make no mistake: between all the films, concerts and panels to choose from, the festival’s sixth year may be the start of something much bigger. There are enough events happening to make creating a schedule for the long weekend a serious challenge. You might be here for work, or just committed to pleasure; whether you’re a tourist or a local, sticking to Milwaukee Avenue or exploring Chicago at large, CIMMfest has you covered. A festival pass will set you back $75, and guarantees you access to one headliner, three other CIMMfest sponsored events, and more than a hundred others on a first-come first-serve basis. There are endless possibilities. Here’s a suggested schedule to get you started:

Never heard of the Mekons? Here’s a chance to learn about the birth of British punk, the rise of new wave, and the comedown of burnt-out country & western. Stick around for a Q&A with original member Jon Langford and ask him how difficult it’s been to outlast more than a dozen musicians in a band that’s managed to do it all.

Once-in-a-lifetime billing between indie-rock savants and a local jazz legend that requires little by way of description, and much by way of insistence that you attend this concert no matter what obstacles must be overcome.

James Booker was a quintessential New Orleans pianist with a story as flamboyant as his personality. Seriously, the guy was black, gay, had one eye and could play classical piano as well as he could rant about the CIA, often in the same song. How could a film about his life be boring?

Somewhere between Low and Shellac you’ll find the post-rock underpinnings of the Bay Area’s A Minor Forest, performing in Chicago for the first time in fifteen years to celebrate lavish vinyl reissues of their recorded output courtesy of Thrill Jockey Records.

SXSW co-founder Louis Black is the keynote speaker and BAADASSSSS award winner at this year’s CIMMfest, and he will be on hand to introduce this film, which he also executive produced. Van Zandt is an insurmountable name in the Americana world, and his legacy is very much worthy of this extensive profile.

There are few causes in Chicago more urgent than combating homelessness, and this panel promises some thoughtful discourse from rapper-turned-would-be-alderman Rhymefest, and Neli Vazquez-Rowland, founder of A Safe Haven, an organization which helps the homeless become homebound.

Muddy Waters; from Mississippi to Chicago
(5:30pm at the Logan Theatre, free.)

Some of the best Muddy Waters scholars in the world collected in Chicago to discuss the legendary musician alongside his own son. What more could you want from a panel?

These New Puritans
(9pm at Empty Bottle, $15 without a pass.)

Only in the United States for four tour dates, These New Puritans promise a night of compelling contemporary classical music that somehow emerged from a group of post-punk obsessed Brits. Go figure.

Undeniable gospel heavyweights that left Chicago to gain worldwide notoriety, only to return home and continue singing the praises that initially earned them widespread acclaim. Stick around after the documentary for a short performance from the legendary ladies.

In this documentary, the fifth-largest company in South Korea manufactures their own K-pop stars, offering as much insight into the musical expression as the demand on the artists who perform it.

With the MG’s, Booker T. was the backbone for Memphis soul and much of the notable Stax Records output. This performance fulfills the promise of CIMMfest’s prestige, proving once and for all that this festival is more than just potential.