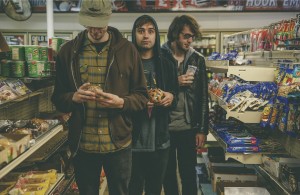 For years now, Internet culture has spoiled rabid music fans with an overabundance of new releases. Listeners often seem to devour and then toss aside each new album in favor of the next big “Best New Music,” and punk trio Cloud Nothings could very well be the poster children of the movement. When the band’s fantastic 2012 release “Attack on Memory” hit virtual shelves, the Internet buzzed with excitement over what seemed like a hard-rocking debut. But the album was Cloud Nothings’ third, and you wouldn’t know it from listening. For the band’s first two albums, Cloud Nothings had been a well-received, homespun lo-fi pop solo project. Then lead man Dylan Baldi threw the whole formula out the window and charged onward, in classic Internet age fashion. In came a hard-hitting rhythm section, a much darker edge to the lyrics, and lots more screaming: punk outfit Cloud Nothings was born. With their fourth album (or sophomore effort, depending on how you look at it), this year’s “Here and Nowhere Else,” Cloud Nothings have cemented themselves as the band that broods over gravelly bass lines and tons of distortion, whacking listeners over the head with a heaping of guttural shouts and anthemic choruses. Baldi and company harbor no illusions about what fans expect of their live set lists—their performance at a recent New York show featured nothing but cuts from “Attack on Memory” and “Here and Nowhere Else.” They seem as intent on ignoring their history as everyone else, and the modern punk landscape is better off for it. An attack on memory indeed. (Robert Szypko)