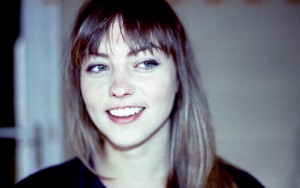 Since the budding stages of her career, back when she used to play acoustic sets at quiet St. Louis coffeehouses as a teen, Angel Olsen has been most comfortable doing things by herself. Yet the addition of drummer Josh Jaeger and bassist/keyboardist Stewart Bronaugh to her latest LP “Burn Your Fire For No Witness” succeeds not only as a small triumph marking the formation of Olsen’s first-ever and very own band, but also as an amplifier for the trembling sense of nakedness usually drawn from the unsettling poetry of her lyrics.

Olsen’s sophomore album was released just a couple months ago. It is her first on the folk friendly label Jagjaguwar and follows her previous solo endeavors; an EP titled “Strange Cacti” (2011) recorded in a kitchen, and her debut studio album “Half Way Home” (2012), as well as several collaborative works. Much like the title suggests, “Burn Your Fire For No Witness” delves into themes of solitude and the void one feels and the questions one becomes acquainted with when love dies in a state of misunderstanding. Versed in a style that morphs between 1950s country and the dream-like stanzas of Leonard Cohen, Olsen sings with a range that crisscrosses from a delicate indie-fied Loretta Lynn to an indomitable PJ Harvey.

Her lulling voice and deeply personal lyrics are at the forefront of every song and stay with you the way last week’s bonfire hides in your wool jacket. This technique is one that Olsen has been working toward over the years. Though they come off as dark, her songs are equally beautiful. As the listener, you may find yourself going back to each song again and again with the hope of pinpointing an acute meaning. In doing so, the only discovery you will make is that Angel Olsen’s songs are too broad to hold in one place. The better approach is to imagine them as if they were an ocean off a beach. Walk in, lay back, try to stay afloat and listen to the waves as you let them gently toss you about. (Jessica Burg)