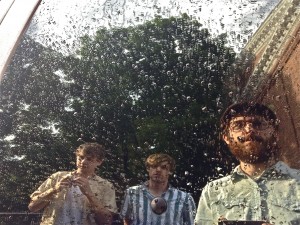 Deep from years of lo-fi wilderness emerges the latest from Woods, “With Light And With Love.” A brighter, more wistful punch than the jagged, buried pop-whispers we’re used to from this outfit, it’s also the band’s most human record. Like a nod to Roger McGuinn, they amble along bluesy bars on the opening track “Shepherd,” reaching out to smiling, commonplace lovers in their neighborhood saloons. The strummy groove of “Moving To The Left” considers directions literally and existentially all at once—a sign they are drawing just a bit too much from the 1960s ethos they’ve previously mined for just the right touch of sunniness. Make no mistake, though: these boys are still a joy. They’ve sacrificed more of their discomfiting nature than I’m comfortable with, and their dare to not be as hip and aesthetically prodding hasn’t entirely paid off—but I’d more than trust them to make offbeat spirits of a room for one night. There’s a singular, sad-sweet weirdo clarion stitched into Jeremy Earl’s voice that won’t go away, and Woods will be worth our time until God takes that rare gift out of him. (John Wilmes)