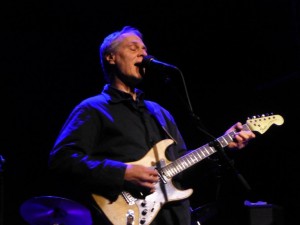 It is true that forty years and about a month ago, Television played the first show at a newly reopened country, bluegrass and blues club on New York’s Bowery and changed the course of music history. CBGB’s became the spring that spat out punk rock, and Richard Hell—the band’s bassist, and co-founder with Tom Verlaine—the prototype punk emulated by the Brits.

Originally, Verlaine and Hell were angst-ridden best friends with an “us against the world” contemptuous attitude who wrote and published poetry as one entity. But Verlaine’s interest in control and perfection prevailed over Hell’s chaos, and the chiming, precise, intertwining of Verlaine’s compositions ultimately became the dominant fabric of the band, leading (perhaps aided in part by Verlaine’s relationship with Patti Smith, who encouraged him to take charge) to Hell’s departure in 1975.

Despite all that punk rock cred, punk is a misnomer for the Television most of us know, and the one you should get to know if you haven’t yet. The music was and is characterized by dual guitar leads, sliding along the spectrum from simple to intricate call-and-response, discord to harmony, fierce and furtive to majestic and beauteous, staccato riff on top of riff, to improvisational, jazzy, atmospheric heights. It’s really progressive and powerful.

Television reformed for at least its third time since 1982 last year to play the “Marquee Moon” album (number 130 on Rolling Stones’ top 500 albums of all-time—definitely in my top twenty-five) at the All Tomorrow’s Parties festival. At the Metro, expect the band to rely heavily on that album, including a monster fifteen-plus-minute version of the title track full of rave-ups, crescendos and trips to other places. But there are likely to be rarities, like “Little Johnny Jewel” (whose simplistic lyrics may be one of the only aspects of the show that don’t really hold up) and a cover, like “Psychotic Reaction.”

Verlaine, at sixty-four-and-a-half years of age, is still one of rock’s guitar gods, though not a particularly charismatic force. He is a perfectionist/craftsman. Today the rhythm section is comprised of original drummer Billy Ficca and Fred Smith on bass (who joined up in 1975) the same as on the 1978 “Adventure” album, who provide the heartbeat and engine that lets Verlaine and his co-conspirator/collaborator Jimmy Rip slash or burn bright. Rip is the “newbie” to the band replacing Richard Lloyd, and he often steps out of Verlaine’s shadow by providing some great leads of his own.

One dose of Television and you would never think forty-year-old pre- and post-punk could sound so alive, fresh and modern. But, if you need some hip, indie reference points for endorsement, you can look to Carrie Brownstein and Wild Flag who often started their sets (including their performance at the Pitchfork Music Festival) with a cover of the hypnotic, swirling, spurting “See No Evil” as an homage and announcement that they were a double-lead-guitar band. More recently, at the Fun Fun Fun Fest in Austin last year, Bradford Cox of Deerhunter said it all: “I have waited my whole life to see Television.” You only need to wait until next Thursday. (Bart Lazar)