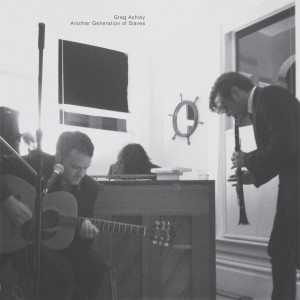 Despite the presence of a seductively strummed acoustic guitar paired with the flair of Dixieland jazz clarinet and piano, Greg Ashley’s latest is anything but easy listening. “Another Generation of Slaves” confronts the listener on the bleakest terms imaginable, and the battleground is lyricism laced with acerbic, existential posturing and pondering. Couplets like “Bow down to the Western world a slave is born, / embrace your complacency it’s your uniform,” from “Medication #7” would sound just as at home on a crust punk record as they do here, and that’s what makes this recording so remarkable. Ashley clearly understands that the singer-songwriter craft has little to do with conjuring mediocre melodies for their own sake, and focuses much of his attention on spitting lines that bite and growl with all the energy of a feral dog. Somewhere along the way, Ashley must have bottomed out, perhaps after The Gris Gris ballyhoo failed to garner commercial or critical success. How else would it be possible to deliver “You make me feel like shit, / I wanna kill myself” as the opening lines to “Awkward Affections”? This is the catchiest song on the record, an effort that embraces folk, twee, and indie-rock in one big hangover of misery and despair. “Another Generation of Slaves” sounds like Leonard Cohen went down to New Orleans; got robbed, beaten and then drank his way back to health, only to realize how empty his existence was before he even got into town. Dear God, let’s hope Ashley has a sense of humor, or this album may be his last, and that would be a tragedy of even greater proportions than life itself. (Kenneth Preski)

“Another Generation of Slaves”
Greg Ashley
Trouble In Mind