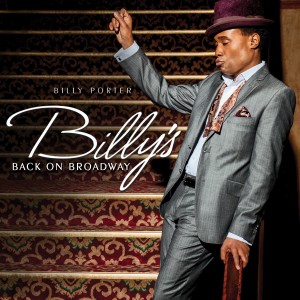 There was a time when it was natural for show tunes to make their way to the pop realm—singers like Ella Fitzgerald, Billie Holiday, Tony Bennett and Frank Sinatra all borrowed songs written for the stage and turned them into standards—including “On the Street Where You Live” (from “My Fair Lady”) recorded by Nat King Cole; “Luck Be a Lady” (from “Guys and Dolls”), a hit for Sinatra; ‘Till There Was You” (from “The Music Man”) famously covered by  The Beatles; and of course  “Don’t Cry For Me Argentina” (from “Evita”), a tune overplayed even before Madonna got her hands on it.

Nowadays it is unlikely for such songs to contribute to the Hot 100 even with the help of heavyweights like Bono or Elton John—the business has just changed too dramatically for that to happen (do you really hear anyone belting out “Seasons of Love” from “Rent” at your local karaoke bar?). That doesn’t mean that some tunes don’t deserve to be heard by non-musical theater fans, and that is where Billy Porter comes in.

Though he is mostly engaged in the musical theater scene (as of this writing, he is playing Lola in the musical “Kinky Boots”), he has also had a recording career bringing those songs to a pop realm. On “Billy’s Back on Broadway” he revisits some classics in different formats–Kander and Ebb’s “But The World Goes Round” and “Don’t Rain On My Parade” from “Funny Girl” get the big band treatment, while ballads like “On the Street Where You Live” and “Luck Be a Lady” go in a more neo-soul direction. The touching “I’m Not My Father’s Son” (from “Kinky Boots”) gets a soul arrangement, and he is joined by none other than Cyndi Lauper (who wrote the previous song) for a surprising mash-up of “Happy Days Are Here Again” and “Get Happy.”

This is not necessarily an album for musical theater fans–it is a pop/soul disc of tunes redesigned for a more general audience that will make many fans rethink the genre and maybe make that long-awaited trek to the next show. (Ernest Barteldes)