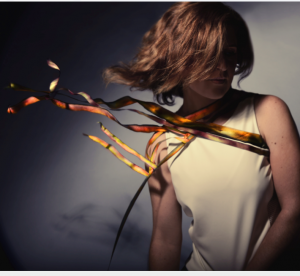 Brooklyn-based singer-songwriter Mirah came through Chicago last night to support her fifth full-length album, “Changing Light,” which finds the singer dealing with a breakup with a resigned and older awareness, and yet still wandering and pondering.

Mirah’s albums have always had ups and downs. Some songs seem to meander around without a central point, and seem, at least on first listen, a little light on variety and depth. But when she hits the mark, it’s magical. She chose her setlist well, performing the strongest songs from the new album. Her backing band, playing drums (live and synthetic), violin, keyboards, guitar, and bass, made the most of the quiet-loud juxtapositions, and the dark, spare spaces that mark her best material.

A little out of voice with a cold, Mirah hung back a little on the vocals, which frustrated her. Her restraint didn’t take away much, though there was a feeling she might have wailed a bit more in a few moments otherwise. Her voice, once a bit too childlike and sweet to really effectively navigate the darker turns in her conceptual language, now seems sturdier and with just enough huskiness brought about by age to make it truly beautiful. The audience leaned in to her every utterance, her carefully framed words encouraging attentiveness. Her two backing vocalists provided strong support to her hazy lilt, and their work together seemed to lift the sound to the rafters for an almost reverential vibe.

The openers Led to Sea (also Mirah’s violinist), and cheerful country band Loamlands both impressed. Loamlands were particularly professional, and with their singer’s irresistible voice and the clear chemistry among them, they seem poised to be better known. (Emily Johnson)