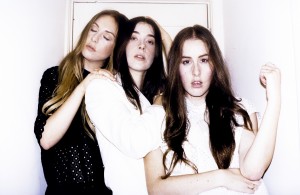 Sisters Danielle, Este and Alana Haim certainly earned the right to become 2013’s indie “it” girls. Along with drummer Dash Hutton, the fourth member of their band Haim (which rhymes with “time”), the climb to recognition started off steep. For four years they busted their humps all over the San Fernando Valley, often as an opening act. It wasn’t until a 2012 conquest of SXSW that folks started to respond to their music, and the buzz has spread with the release of their first full-length album “Days Are Gone.” Haim’s sound is refreshingly new and unlike everything else, yet can still somehow be attributed to a distinct variety of influences, notably classic rock, eighties pop and contemporary R&B. Their songs go in all kinds of directions, like a kite whirling in the wind.The string, then, must be their energetic three-part harmony, which evokes an image of Chrissie Hynde, Paula Abdul and Dusty Springfield together in a recording booth, drinking rosé and having a blast. Even as twenty-somethings, all three have had several years of rock-band experience thanks to a mother and father who brought them up in a family band. Their talents precede them, as each has mastered three or more instruments. Everything about Haim—their years of practice, the familial bond, their young spunkiness—gives reason to why they’re just so damn likable and play so damn fierce. (Jessica Burg)