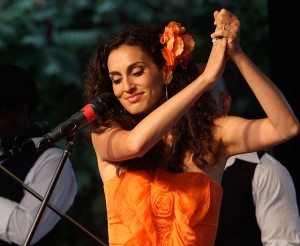 What happens when you get an MBA in international business with the objective of working for a major financial corporation? Do you leave it all behind to pursue the uncertainty of a musical career instead? This is precisely what happened to Canadian singer Amanda Martinez; she was bitten by the music bug after passing an audition in a small jazz club in her native country–and she has not looked back since.

Since then, she has recorded three albums and was a featured performer during the 2010 FIFA World Cup in South Africa–where her mother was born. Martinez’s music is very Latin-influenced, as heard on “Mañana,” her third album, and the first to be released in the United States.

Her sound is mostly rooted in flamenco with a strong pop influence. For instance, “Esperanza Viva” blends flamenco and samba (with a cavaquinho thrown in for good measure) while the English-language “Frozen” goes into more of an Afro-Cuban direction. She is equally comfortable singing ballads like “Let’s Dance” and “No Hay Distancia.” She is currently touring in support of the album, with only three stops Stateside. In a live setting, she blends her songs with very personal renditions of tunes like “La Llorona” and a handful of covers. She is backed by a tight quartet formed by Kevin Laliberte (guitar), Alberto Suarez (percussion), Paco Luviano (bass) and Alexander Brown (hand percussion, trumpet and vocals), who all sing backing vocals. She is a charming performer and ripe for discovery by a mainstream audience. (Ernest Barteldes)