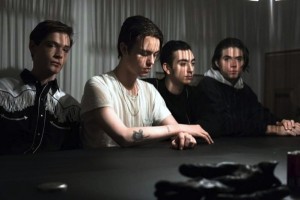 Danish punkers Iceage impressed the music blogger scene a couple of years ago with their debut full-length, “New Brigade,” and their electric live performances. For music fans, their brand of uncompromising punk rock is a breath of fresh air in a indie-rock world that seems to shy away from a real sense of abandon and danger. But the band’s troubling, continuous embrace of fascist images and references is impossible to ignore. Google the terms “Iceage and fascism” or “Iceage and racism” and you’ll find a laundry list of charges, among them the fact that more than one member has worn t-shirts and merch for the Norwegian black metal band Burzum, whose frontman, Varg Vikernes, was jailed for murder, and is an unsympathetic white supremacist and homophobe. Iceage’s band members initially remained evasive against the accusations, then later—and rather passively—denied them, claiming political ignorance and pointing out that one of their members is Jewish.

I personally have no clue if Iceage’s connection to fascism is borne from the intent of aligning with a right-wing message, a clumsy attempt at commentary, or a nihilistic, youthful desire to court controversy for its own sake. (The band’s members are barely out of their teens.) All I know is that it’s impossible for me personally to even consider enjoying Iceage’s music without this connection in the back of my mind.

Others’ mileage may vary.The band has plenty of defenders (some of them people of color), an equal amount of detractors, and a lot of curious music fans that struggle with their own personal decision of whether to support them or not. But at this point, the only thing that’s clear is that the controversy seems to have overshadowed much of the conversation about their actual music. (Keidra Chaney)