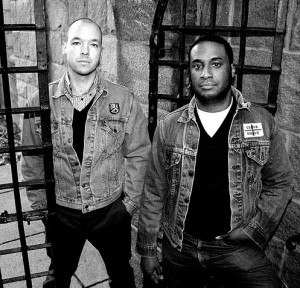 There’s surely a socio-economic reason for American skinhead bands flourishing in the nineties. Or maybe it was a logical extension of other underground genres winding up on MTV. What if Oi! was almost the next big thing? Let’s just blame the Clintons and forget that Dropkick Murphys used to be important to anyone. Whatever the explanation, Midwest Live and Loud (a sly reference to all those split live recordings from first and second wave UK punk acts) has rounded up a surprisingly vast array of performers for its three-day festival. An argument can be made for supporting acts, like Fear City and Noi!se—and there’s no reason to shy away from that take on the genre. It’s just that the Templars, Sunday’s headliners, are unquestionably the most musically talented Oi! band of the last two decades. Everything from the group’s uncanny guitar sound to its ability to, you know, actually play, makes it an utterly unique act amid the countless bands copping UK slang. At its core, the New Yorkers are just another skinhead band. But the nuanced way its players are able to move between sections of its compositions, play with rhythm and write lyrics that push beyond the genre’s halfwit tropes is an amazing thing. And it’ll be even more apparent coming at the end of this weekend. Phil Rigaud and Carl Fritscher, the two original Templars left in the band’s lineup, likely won’t ever be afforded proper acclaim, but hopefully weekend blowouts like this one are enough to keep them engaged with making music, and will convince them to continue. Oxblood, Friday’s headliner, has its moments, but most of them are pretty fleeting. The following day, Pressure Point and the Brassknuckle Boys perform, offering the festival’s strongest combination of bands. But Sunday’s set by the Templars, NYC’s finest multiracial, French-loving, history-buff skinhead band, won’t have peers. Skinheads rule, OK? (Dave Cantor)